Reviews and Commentaries for the Music of Joe Pass 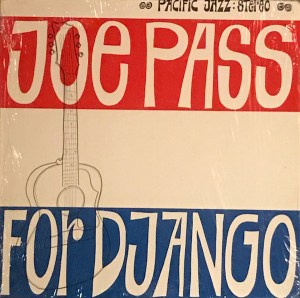 White Hot Stamper sound on both sides — this is some killer jazz guitar “trio” sound. There are actually two guitarists on this record, John Pisano being the other one, plus bass and drums. We’re big fans of Pacific Jazz recordings from this era, with 1964 live in the studio Tubey Magic to die for.

We’ve played quite a few of these early jazz guitar records by the likes of Kenny Burrell, Joe Pass, Charlie Byrd, Grant Green, Wes Montgomery and others. Can’t say I’ve ever heard a better sounding one than this.

The All Tube live in the studio approach to the recording results in natural, open, rich, clear, spacious, dynamic sound the likes of which you may have never experienced. The exceptionally clear, tight, note-like bass is an added bonus — not many tube recordings get the bass to sound that way!

The cover has writing in the upper right corner of the front and a bit of seam wear. The record plays about as quietly as a 1964 jazz record ever does.

And the sound is Hard to Fault (HTF) on both sides

Long considered a classic, guitarist Joe Pass’ fourth date as a leader finds him performing music that was composed by Django Reinhardt, was part of his repertoire, or is one of two more recent tributes (John Lewis’ “Django” and Pass’ “For Django”). Pass is joined by the rhythm guitar of John Pisano, bassist Jim Hughart, and drummer Colin Bailey; the quartet would reunite in the 1980s. Although Pass was actually more strongly influenced by Charlie Christian than by Reinhardt and he had already formed his own style, he has no difficulty fitting into the music. Highlights include “Rosetta,” “Nuages,” and “Limehouse Blues.”