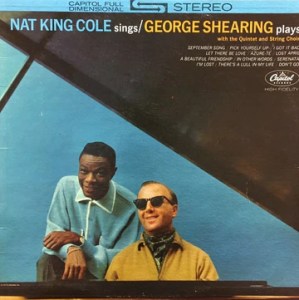 The better pressings of this unique collaboration between Nat King Cole and George Shearing put Cole’s voice right up front with lovely breath and natural texture. On the better copies such as this one, the Nat’s vocals are full-bodied, the piano has real weight, and the soundfield is open and transparent. If you want a great-sounding male vocal LP in your collection, this one will do the trick nicely.

The reissue pressings rarely sounded right to us. In addition, the mono copies were uniformly awful — small, congested and gritty. Our Hot Stamper pressings — even the lowest-graded copies we offer –are sure to give you fuller vocals, more transparency, more weight to the piano and, of course, the tubey warmth of vintage analog.

This early ’60s Capitol LP has the kind of Tubey Magical Midrange that modern pressings cannot BEGIN to reproduce. Folks, that sound is gone and it sure isn’t showing any sign of coming back.

Having done this for so long, we understand and appreciate that rich, full, solid, Tubey Magical sound is key to the presentation of this primarily vocal music. We rate these qualities higher than others we might be listening for (e.g., bass definition, soundstage, depth, etc.). The music is not so much about the details in the recording, but rather in trying to recreate a solid, palpable, real Nat “King” Cole singing live in your listening room. The best copies have an uncanny way of doing just that.

Although it would have been interesting to hear Nat Cole play some piano and perhaps accompany a vocal by George Shearing instead of exclusively the other way around, this session was a big success. Cole is in prime form on such songs as “September Song,” “Pick Yourself Up,” and “Serenata.” Shearing’s accompaniment is tasteful and lightly swinging, and the string arrangements help to accentuate the romantic moods.