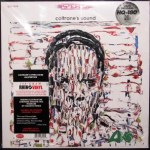 This is one of the better sounding Heavy Vinyl pressings we have played recently.

What makes it different from so many others that fail to live up to the remastering hype that surrounds them (and irritates the hell out of those of use who know what a good record is actually supposed to sound like)?

It is slightly veiled, and lacks some of the life, the space and obviously some of the presence of the real thing, the real thing in this case being an early stereo pressing on the Blue and Green Atlantic label.

Still, for your money you are getting one helluva good record. One of the top two or three Rhino records to date.

(Bernie did a great job on this Coltrane album, but whatever you do, don’t waste your money on his recut of Lush Life. It is just plain awful, a Hall of Shame pressing that’s so bad it defies understanding. Something sure went wrong somewhere, I can tell you that. Stay tuned for my review.)

This is yet another superb Tom Dowd recording of Coltrane in his prime, with support from the brilliant McCoy Tyner and Elvin Jones.

Advice on Which Pressings to Buy

Forget the later Red and Green Atlantic pressings. Every one we’ve ever played was flat, dry, and thin. They sound like the cheap reissues that Atlantic churned out in the ’70s. Don’t get me wrong; there are some good sounding records on the Red and Green label, but you have to really know what you are doing — or be very lucky — to find them.

We’ve played them by the score, and found relatively few winners among a slough of losers. If you want to take your chances on some, knock yourself out, more power to you, but expect to come up with nothing to show for your time and money almost every time. That’s been our experience anyway.

And be very thankful if you happen to run into one of these early Atlantic stereo pressings. Few Classic Coltrane albums survived the jazz lovers of the day and their awful turntables.

The Night Has a Thousand Eyes
Central Park West
Liberia

This is one of the most highly underrated entries in Coltrane’s voluminous catalog. Although the same overwhelming attention bestowed upon My Favorite Things was not given to Coltrane’s Sound upon its initial release, both were actually recorded during the same three-day period in the fall of 1960. So prolific were those recording dates, they informed no less than five different Coltrane albums on Atlantic. The title could not have been more accurate, as each of the six pieces bear the unmistakable and indelible stamp of Coltrane’s early-’60s style… these recordings remain among Trane’s finest.

When you can hear them that way, up against an actual good record, their flaws become that much more obvious and, frankly, that much more inexcusable