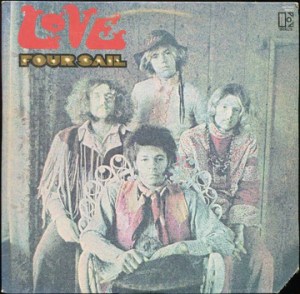 What We’re Listening For on Four Sail

From a retrospective point of view, this might be the first album in the career of singer and songwriter Arthur Lee that might have been received with more enthusiasm had it been released under his name, and not under the band name. Obviously, it must have been in his commercial best interests to retain the Love identity, but here Lee is the only member of the original band left. He is trying to recreate a Love-able identity with fewer players than he had before and a completely different sound.

… Lee’s new lineup here does not have this kind of versatility. Guitarist Jay Donnellan plays a heavy lead guitar minus the impressive chops and gets lots of solo space in the arrangements. The rhythm section favors a more leaden sound as well, particularly drummer George Suranovich, who soaks the barbecue with Keith Moon and Mitch Mitchell licks. Lee fills in on several different instruments, but his real strength is the set of ten original songs he has provided.

The tracks are deep in feeling and performed with an emotional fervor that sometimes approaches anguish. It is like going into a dark coffeehouse late at night and finding an electrically charged performer delivering messages about things familiar to one and all: love, memories, friendship, “Good Times,” and even “Nothing.” Lee’s lyrics and performances have been compared to Jimi Hendrix, certainly a compliment. This album is such a good example of these strengths that it rises above the garage band sound to communicate a sense of time and place as well as some truly sincere feelings.