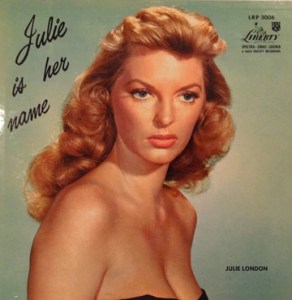 Listen to how rich the bottom end is on Barney Kessel’s guitar. The Tubey Magic here is off the charts. Some copies can be dry, but that is clearly not a problem on this one.

This is the kind of record that the mono cartridge owners of the world worship, with good reason: the sound is amazing. But you don’t need a mono cartridge to hear how good, in fact how much better, this copy sounds than the stereo pressing.

The recording is mono, which means that the stereo pressings are actually reprocessed into stereo. Not too surprisingly the sound is terrible.

What We’re Listening For on Julie Is Her Name

For a time, Julie London was as famous for her sexy album covers as for her singing. Her debut is her best, a set of fairly basic interpretations of standards in which she is accompanied tastefully by guitarist Barney Kessel and bassist Ray Leatherwood. “Cry Me a River” from this album was her biggest hit, and her breathy versions of such numbers as “I Should Care,” “Say It Isn’t So,” “Easy Street,” and “Gone with the Wind” are quite haunting.

Julie London once said of her vocal style, “It’s only a thimbleful of a voice, and I have to use it close to a microphone. But it is a kind of oversmoked voice, and it automatically sounds intimate.”

Nothing could be more true of her debut album, Julie is Her Name. London, backed only by Barney Kessel on guitar and Ray Leatherwood on bass creates one of the purest, most subtle lounge albums of all times (not to mention one of the best vocal jazz albums ever). Her tormented version of “Cry Me A River” became her biggest hit and became the gold standard for all future versions of the song.

Born to a song-and-dance family, London grew up with music all around her. Although she decided to pursue the acting side of show business, she never lost her love of music. During her marriage to Jack Webb (of Dragnet fame), her love of jazz and going out to nightclubs grew. With a little prodding from her soon-to-be second husband Bobby Troup (who is famous for penning “(Get Your Kicks On) Route 66”), London took that leap from nightclub patron to nightclub performer.

In the liner notes to the Julie Is Her Name, London was referred to as the “the girl with the ‘come hither’ voice.” Add to that a little cheesecake on the front cover and London’s sultry image was complete. Produced by Troup, Julie Is Her Name pushed London into the musical spotlight. Although London kept recording into the late 60’s, nothing matched the beautiful simplicity and warmth of her first album.