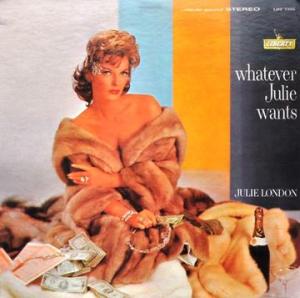 What We’re Listening For on Whatever Julie Wants

Julie London was equally famous for her cool vocal style and her rather cold beauty. She normally specialized in torch songs, singing bleak songs of lost love, but on Whatever Julie Wants, London plays the part of a vampish sexpot who treats love as a commodity to trade with wealthy men. Sure, it’s a sexist album that’s more famous for its cheesecake sleeve photo of London naked under fur, diamonds, money, and a strategically placed champagne bottle, but it is a fun album and one that can be enjoyed for its individual songs or its narrative thrust.

While most concept albums featuring popular standards don’t really follow a strict story line, Whatever Julie Wants does. It begins with the protagonist uttering an innocent lover’s plea before mistreatment turns her into a jaded gold digger (“Daddy” and a host of other tracks), then a prostitute (“Love for Sale”), and a step up to kept woman (“Always True to You in My Fashion”). Just as things are looking bad, London finally realizes that you can live without a man and his money with “There’ll Be Some Changes Made,” because the onetime temptress is just too darn “Tired.” This may not be Julie London’s finest musical hour, but the album is undeniably entertaining and it offers a Technicolor sex comedy break from her usual world of shadowy film noir.