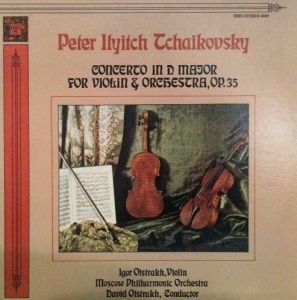 This vintage Musical Heritage Society pressing has the kind of Tubey Magical Midrange that modern records can barely BEGIN to reproduce. Folks, that sound is gone and it sure isn’t showing signs of coming back. If you love hearing INTO a recording, actually being able to “see” the performers, and feeling as if you are listening live to the orchestra, this is the record for you. It’s what vintage all analog recordings are known for — this sound.

The Violin That Ate Cincinatti

Yes, it may be oversized, but it’s so REAL and IMMEDIATE and harmonically correct in every way that we felt more than justified in ignoring the fact that the instrument could never sound in the concert hall the way it does on this record — unless you were actually playing it (and even then I doubt if it would be precisely the same sound — big, but surely quite different).

This is where the mindless and all but fetishistic embrace of “the absolute sound” breaks down completely. Recordings that do not conform to the ideal sound of the concert hall are not necessarily bad or wrong. Sometimes — as we think might be the case here — records with this sound can actually be more involving than their more “natural” counterparts.

This is especially true for rock and jazz, but it can also be true — at least to some degree — for classical music as well. If you don’t agree with us that the sound of the violin on side two of this pressing is more musically involving than it is on side one, you may of course return it for a full refund.

MHS remastered the original 1967 Melodiya tape in 1979 in order to produce this record, dramatically improving upon the sound of the version that I knew on Angel, which shouldn’t have been too hard as the Angel is not very good.

Wait a minute. Scratch that. MHS didn’t cut the record, an engineer at a mastering house did. Fortunately for us audiophiles, the job fell to none other than Bill Kipper at Masterdisk.

Once Masterdisk had done their job, MHS proceeded with theirs, pressing it on reasonably quiet vinyl and mailing it out to all their subscribers. Can you imagine getting a record this good in the mail? It boggles the mind. Of course Reader’s Digest did something very similar in prior decades, and some of their pressings are superb, but I can’t think of a single one that sounds this good or plays this quietly. For a subscription service record label release, this one raises the bar substantially. Hell, for a recording of the work itself this copy raises the bar. It’s without a doubt one of the best recordings of the Tchaikovsky Violin Concerto I’ve ever heard, and I’ve heard a score of them if not more.

Depth, Width and the Third Dimension

The violin here is superb — rich, smooth, clear, resolving. What sets the truly killer pressings apart is the depth, width and three-dimensional quality of the sound. The Tubey Magical richness is to die for. This record sounds more like 1959 than 1967, or 1979 for that matter.

Big space, a solid bottom, and plenty of dynamic energy are strongly in evidence throughout. Zero smear, high-rez transparency, tremendous dynamics, a violin that is present and solid — it takes the sound of this recording beyond what we thought was possible.

As good as any on record. Igor Oistrakh, the son of the legendary David Oistrakh (here conducting), turns this one into a real barn burner. Play it against the recordings of Heifetz, Milstein, Campoli, Grumiaux, Szeryng — all our favorites — and any others you may know and we guarantee this one will hold its own with the best of them.

This wonderful violin concerto — one of the greatest ever composed — should be part of any serious Classical Collection.

Think what a different audio world it would be if we still had Bill Kipper with us today, along with the amazingly accurate and resolving cutting system he used at Masterdisk. There are no records being produced today that sound remotely as good as this budget subscription disc.

Furthermore, to my knowledge no record this good has been cut for more than thirty years. The world is awash in mediocre remastered records and we want nothing to do with any of them, not when there are so many good records still to be discovered and enjoyed.

Remember, it’s all but impossible to wear out a record these days with modern, properly set up equipment no matter how often you play it.

So prodigal is Tchaikovsky’s melodic inspiration that he can afford to begin the sonata-form opening movement with a lovely little theme for orchestral violins and then — just as he did at the beginning of his First Piano Concerto — never play it again. The orchestra next hints at the big theme to come and provides anticipatory excitement for the soloist.

After a brief warm-up stretch, he launches one of Tchaikovsky’s most inspired themes, and one with multiple personalities. At first, it is gentle, even wistful, but when the orchestra takes it up a few minutes later, it becomes very grand: music for an Imperial Russian ball.

Later still in the development section, the soloist transforms it again with an intricately ornamented, double-stopped variation. The violin’s second theme, begun in its warm lower register, retains its wistful nature. Much later in the poignant recapitulation section, the principal theme is beautifully adopted by the solo flute.

The exquisite second-movement “Canzonetta” (“little song”) in G minor — Tchaikovsky’s one-day miracle — blends the melancholy colors of woodwinds with the violin. Tchaikovsky scholar David Brown suggests it reflects the composer’s homesickness during his self-imposed exile from Russia. Rather than ending, it rises on a two-note sighing motive and then explodes into the Allegro vivacissimo finale.

In this hearty rondo inspired by Russian folk dance, Tchaikovsky finally lets the soloist fly. He alternates two contrasting themes: the first a high-spirited scamper; the second a slower, downward-drooping melody that shows off the violin’s earthy low register and also features a nostalgic dialogue with woodwind solos. At the close, the dance keeps accelerating to a breathless finish.