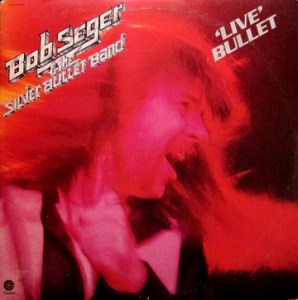 What We’re Listening For on Live Bullet

Lookin’ Back
Get Out of Denver
Let It Rock

Live Bullet introduced Bob Seger to a wide audience, revealing a rocker of unbridled passion and a songwriter of considerable talent. Prior to its release, Seger had been toiling away, releasing seven albums and touring constantly ever since his debut scraped the national consciousness in 1968.

The psychedelicized days of Ramblin’ Gamblin’ Man are long gone on Live Bullet, leaving behind a rocker who loved the Stones for their toughness, Dylan for his honesty, and Chuck Berry for his narrative — and one who found his own sound when the Silver Bullet Band came into its own through countless tours. Live Bullet was recorded live at Detroit’s Cobo Hall, in front of a passionate, loving hometown audience spurring him into a great performance.

The song selection relies heavily on Beautiful Loser, yet it dips into the previous albums enough to prove that Seger had been delivering consistently as a songwriter for years. But what really sold Live Bullet is how these terrific songs are delivered with a ferocious, committed intensity. This might not be much more than a simple rock & roll album, but it’s one of the best of its kind, establishing Seger, in the eyes of skeptics, as a first-rate performer and writer. Here, “Heavy Music,” “Get Out of Denver,” “Turn the Page,” and “Ramblin’ Gamblin’ Man” all become hard rock classics, as does the band itself. It’s a rare occasion when a double live album captures an artist at an absolute peak, while summarizing his talents, and that’s exactly what Live Bullet does.