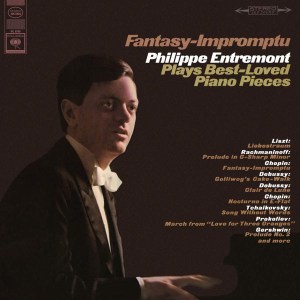 Side one of this copy blew our minds with its Nearly White Hot Stamper sound. Musically and sonically this record is nothing short of amazing. Who knew Columbia could record a piano this well? You could play fifty vintage piano recordings and not find one as good as this!

Tchaikovsky, Liszt, Debussy, Gershwin — these shorter pieces and excerpts were composed by those with the greatest gift for melody, men who have produced works that stand the test of time, enchanting audiences over the centuries with works of great beauty and charm.

This vintage Columbia Masterworks pressing has the kind of Tubey Magical Midrange that modern records can barely BEGIN to reproduce. Folks, that sound is gone and it sure isn’t showing signs of coming back. If you love hearing INTO a recording, actually being able to “see” the performers, and feeling as if you are sitting in the studio with the band, this is the record for you. It’s what vintage all analog recordings are known for — this sound.

What We’re Listening For On Fantasy-Impromptu

It’s clear and clean and solid, yet big, rich and warm the way a piano really sounds in recital. There is no trace of smear on the transients whatsoever.

The transparency is simply amazing — you are there! There aren’t many solo piano recordings that sound this right. When you hear one, it’s shocking how good it can be.

The extended top results in lovely space and harmonic extension. The dynamic contrasts in these works are captured like few piano recordings we have ever heard.

With a huge, rich, open sounding piano. Lovely warm tone too. Though not the best we heard (hence the grade), the sound here is still good enough to beat practically any solo piano record you are likely to own. Let us know if it doesn’t!