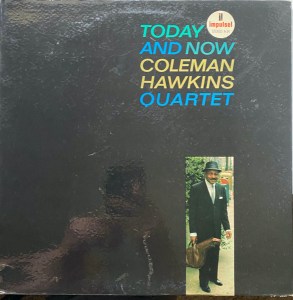 We love the Tubey Magical breathy/reedy style of Coleman Hawkins and Ben Webster. It seems that only the best early vinyl pressings manage to reproduce it properly. The CDs we’ve played over the years have had a tough time finding the richness in the sound; they end up being at least somewhat dry and hard, and that is simply not the right sound for this music.

Although we have a tough time finding clean copies of their 50+ year old albums (this is the first copy we’ve offered in more than 3 years), the sound Rudy Van Gelder managed to get on tape almost always makes it more than worth our while to play their records. There are literally hundreds of classic jazz records from the early ’60s that are as good as this one, if only we could find them in audiophile playing condition. We’re certainly glad we found this one. There’s not a false note or a bad track on it.

This is one of the better sounding Hawkins albums we’ve played in a while.

Some of the reasons why:

Note the clear, extended top end right from the get-go on side one. The second track, a ballad, is where Coleman Hawkins really shines.

What the best pressings of Today and Now have to offer is not hard to hear:

This vintage pressing has the kind of Tubey Magical Midrange that modern records cannot begin to reproduce. Folks, that sound is gone and it sure isn’t showing any sign of coming back.

Having done this for so long, we understand and appreciate that rich, full, solid, Tubey Magical sound is key to the presentation of this primarily vocal music. We rate these qualities higher than others we might be listening for (e.g., bass definition, soundstage, depth, etc.). The music is not so much about the details in the recording, but rather in trying to recreate a solid, palpable, real Coleman Hawkins Quartet playing live in your listening room. The best copies have an uncanny way of doing just that.

Coleman Hawkins was the first important tenor saxophonist and he remains one of the greatest of all time. A consistently modern improviser whose knowledge of chords and harmonies was encyclopedic, Hawkins had a 40-year prime (1925-1965) during which he could hold his own with any competitor. — AMG