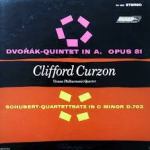 While digging around the web I ran into a site called From Miles to Mozart, which purports to be “An exploration of the incredible world of classical and jazz recordings”

Fair enough. Here is what the reviewer had to say about a London we did not think sounded very good, CS 6357. At the time, he was most of the way through a fairly complete survey of London Bluebacks, and when those were done he went on to review a Whiteback pressing of this London, which appears to be the only pressing he had on hand. (We of course had only the one as well.)

I’d run out of blue so next up was CS 6357 with its retro FFSS label, a white back FFSS. Clifford Curzon scores a knockout with the Dvorak Quintet with a very refined late Blueback sound; truly transcendental sound of the highest order. Another white back FFSS followed in CS 6379 Mozart Clarinet Quintet with a magical clarinet but some edginess at times with some of the instruments. Overall the Clarinet Quintet had very strong sound to rival most any Blueback. Unfortunately, the Mozart Divertimenti on side 2 was not as assured with quite a few signs of strain in the highs indicative some early transistor changing the precious Blueback sound. CS 6379 was recorded by Smith and Parry October, 1963 at Sofiensaal, Vienna with the LP coming out in May of 1964. CS 6357 was recorded in Sofiensaal, Vienna by Culshaw and Parry in October 1962 with the LP in October 1963. Overall two strong LP’s without a Blueback! (Well, CS 6357 does exist with a Blueback.)

He has some ideas about “precious Blueback sound” and the half-speed mastering setup used to achieve them. I will leave that for others to discuss, mostly because I could not seriously entertain this fellow’s writing once I found out what he had to say about one of Mobile Fidelity’s earliest half-speed mastered releases:

Comments: If you want to hear what audiophile vinyl sounds like, this is a great way to start. Whether you like science fiction movies or not, this record is a must hear … and try to turn up the volume if you can. This Mobile Fidelity Sound Lab pressing of Decca SXL 6885 (London ZM 1001) is one of the most incredible sounding orchestral recordings I have ever heard. It may not be the recording used for the movies (John Williams conducted those himself), but it sounds significantly better in terms of recording quality. Talk about lifelike presence, huge dynamic range, bass depth with real visceral impact — this record has DEMONSTRATION written all over it. Even the Cantina Band track gives you the impression of an alien jazz/pop band playing right before you. I was fortunate enough to get my copy for free from a friend, and only recently did I realize that this album sells for some money. Looking for a change from the same old EMI, Decca, RCA, Mercury, DG, or Philips? Try this one. 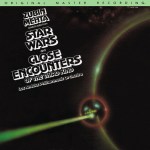 If this is your idea of an audiophile Demo Disc, you are setting the bar awfully low, about even with the height of the carpeting. I consider it a piece of Audiophile trash, one that I never bothered to discuss on the blog. Were I to grade it today I would probably give it a D for sound and an F for music. I remember playing it back in the late-’70 or early-’80s and wondering what on earth was the appeal of such a cheesy, lowest-common-denominator schlockfest.

Years ago I did a little shootout with a few of the early London pressings of the album — which were also mastered by Stan Ricker, not sure if many of you out there knew that — as well as some later pressings not cut by SR, and of course the MoFi.

The MoFi was clearly better than any of the three regular London pressings, as they were just not very good sounding at all, suffering from a problem which makes most later Londons hard to enjoy. That problem is opacity.

For classical and orchestral music it’s the kiss of death.  It is also one of the main reasons we like so few orchestral recordings pressed on Heavy Vinyl. Most of them badly lack transparency, a sonic issue we wrote about more than a decade ago.

If I were to review this MoFi today, I would no doubt end up putting it in a little section I like to call Stone Age Audio Records, comprising the kinds of records that sounded good on modest stereos in the Seventies and Eighties, the ones with loudness controls and speakers sitting on milk crates. On today’s modern and dramatically more revealing equipment these records show themselves to be intolerably phony and offer very little in the way of fidelity.

If your stereo is bad enough to make playback of these records tolerable, you are definitely on the wrong site. Unless of course you want to get rid of all the equipment you own and start over, which is probably the best advice I could give you. With a fresh start you may just find yourself getting a lot more out of this hobby than you ever thought possible. But you would need to rethink your approach to audio, and so does Mr Miles to Mozart.

To sum up, if this MoFi is your idea of an audiophile Demo Disc — if it is in fact “one of the most incredible sounding orchestral recordings [you] have ever heard” — then your evaluations of the records you review on your blog — audiophile or otherwise — are clearly not to be trusted.

We have a section for reviewers of little or no competence — the only kind we ever run into these days, to tell you the awful truth —  and you can find it here. 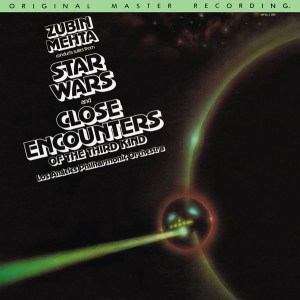