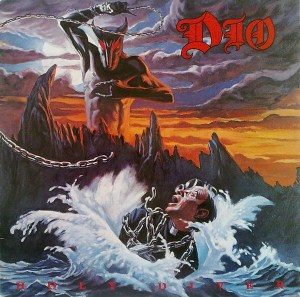 What We Listen For on Holy Diver

After playing a major role in five positively classic heavy metal albums of the late ’70s and early ’80s (three with Ritchie Blackmore’s Rainbow and two with Black Sabbath), it seemed that singer Ronnie James Dio could truly do no wrong. So it wasn’t all that surprising — impressive, but not surprising — when he struck gold yet again when launching his solo vehicle, Dio, via 1983’s terrific Holy Diver album. Much like those two, hallowed Sabbath LPs, Heaven and Hell and Mob Rules, Holy Diver opened at full metallic throttle with the frenetic “Stand Up and Shout,” before settling into a dark, deliberate, and hypnotic groove for the timelessly epic title track — a worthy successor to glorious triumphs past like Rainbow’s “Stargazer” and the Sabs’ “Sign of the Southern Cross.”

Although most fans would agree that Dio would arguably never again replicate the simply sublime symbiosis of beauty and brawn achieved by the all-time standout “Don’t Talk to Strangers.” And, to be fair, aside from Ronnie’s unquestionably stellar songwriting, Holy Diver’s stunning quality and consistency owed much to his carefully chosen bandmates, including powerhouse drummer (and fellow Sabbath survivor) Vinny Appice, veteran bassist Jimmy Bain, and a phenomenal find in young Irish guitarist Vivian Campbell, whose tastefully pyrotechnic leads helped make this the definitive Dio lineup. So, too, is Holy Diver still the undisputed highlight of Dio’s career, and, indeed, one of the finest pure heavy metal albums of the 1980s.