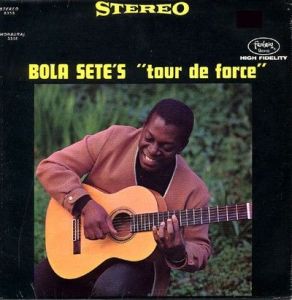 This pressing is tonally correct from top to bottom. As the old saying goes, it wasn’t broke so don’t try to fix it. Aficionados of the guitar or Latin music will find this record very satisfying in all respects.

This vintage Fantasy pressing has the kind of Tubey Magical Midrange that modern records rarely even BEGIN to reproduce. Folks, that sound is gone and it sure isn’t showing signs of coming back. If you love hearing INTO a recording, actually being able to “see” the performers, and feeling as if you are sitting in the studio with the trio, this is the record for you. It’s what vintage all analog recordings are known for — this sound.

What the best sides of Tour de Force have to offer is not hard to hear:

What We’re Listening For on Tour de Force

Then: presence and immediacy. The guitar isn’t “back there” somewhere, way behind the speakers. It’s centered and placed correctly in relation to all the other musical elements, where any recording engineer worth his salt would have put it.

Half-Speed Mastering and Its Discontents

Acoustic Sounds had Stan Ricker remaster this record a number of years ago, and of course they (he) ruined it. A twinkly top end and flabby bass were just two of the major shortcomings of their version. Nothing surprising there, as Stan Ricker is famous for his “smile” curve, boosting both ends of the audio spectrum whether they need boosting or not.

When you add too much top end to a guitar record and ruin the sound of the guitar, what exactly are you left with?

Please note that not a single title from the Analog Revival series is any good, to the best of my knowledge, and all should be avoided. The same is true for all the 180 gram jazz titles on Analogue Productions mastered by Doug Sax, as you may have read elsewhere on the site. Those records received rave reviews in the audiophile press when they came out, but you won’t find too many audiophile reviewers sticking up for them now, as they are, without exception, murky, compressed disasters of the worst kind. I guess these reviewers eventually acquired equipment accurate enough to notice how bad those pressings are, which I guess goes to show there is hope for practically anyone.

Sete led a trio on this mid-1963 date, backed by Fred Schrieber on bass and John Rae on drums. It tilts a little to the mellower, more sentimental side than more driving sessions such as the one he did the previous year for Bossa Nova. It’s still quality by-the-fire jazz bossa nova music, Sete’s playing a lesson in both skill and discreet economy.

While he wrote three of the ten songs, his repertoire of cover selections is fairly wide ranging, taking in “Moon River,” Dizzy Gillespie’s “Tour de Force,” and, as a special highlight, his version of Isaac Albeinz’s “Asturias,” the mournful flamenco-influenced song familiar to any student of Spanish-style guitar. There’s also a samba that Luiz Bonfa had a hand in writing (“Sambe de Orfeu”), and as one of the niftier detours from the usual, a solo interpretation of J.S. Bach’s “Bourree.”