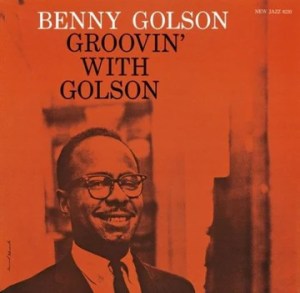 This vintage New Jazz stereo pressing has the kind of Tubey Magical Midrange that modern records rarely even BEGIN to reproduce. Folks, that sound is gone and it sure isn’t showing signs of coming back. If you love hearing INTO a recording, actually being able to “see” the performers, and feeling as if you are sitting in the studio with the band, this is the record for you. It’s what vintage all analog recordings are known for — this sound.

What the best sides of Groovin’ with Golson have to offer is not hard to hear:

The size, the weight, the solidity, the clarity, the energy, the rhythmic drive – it’s all here and more. These guys are playing live in the studio and you can really feel their presence on every track — assuming you have a copy that sounds like this one.

The fact that nobody seems to be able to make an especially good sounding record these days — certainly not as good sounding as this one — tells me that in fact I’m wrong to think that such an approach would work. Somebody should have been able to figure out how to do it by now. In our experience that is simply not the case today, and has not been for many years, if not decades.

George Horn was doing brilliant work on scores of Rudy Van Gelder’s recordings all through the ’80s. This album is proof that his sound is the right sound for this music.

Man, when you play a Hot Stamper copy of an amazing recording such as this, the timbre of the instruments is so spot-on it makes all the hard work and money you’ve put into your stereo more than pay off. To paraphrase The Hollies, you get paid back with interest. If you hear anything funny in the mids and highs of this record, don’t blame the record. (This is the kind of record that shows up audiophile BS equipment for what it is: Audiophile BS. If you are checking for richness, Tubey Magic and freedom from artificiality, I can’t think of a better test disc. It has loads of the first two and none of the last.)

What We’re Listening For on Groovin’ with Golson

The Giants Who Played with Benny on Groovin’ with Golson

I Didn’t Know What Time It Was

This is one of at least four recordings that matched up tenor saxophonist Benny Golson and trombonist Curtis Fuller prior to the formation of the Jazztet; ironically, Fuller only stuck around for one Jazztet record before departing… Three of the tunes are blues, and the two ballads are taken at a medium-tempo pace. With pianist Ray Bryant, bassist Paul Chambers, and drummer Art Blakey forming a solid rhythm section, the hard bop music does indeed groove in its own fashion.

(Eleven out of eleven reviewers give the album Five Stars)

YES – now that is more like the Golson I remember

I don’t know if it is the addition of one of my top five piano players, Ray Bryant, or my top five favorite rhythm sections, Art Blakey and Paul Chambers, but Benny Golson is indeed groovin’ this time. It is obvious from the first song. He is right there for the first solo. No flights of off-groove fancy, just great straight ahead, in the pocket playing, the way I am always used to hearing him. “I Didn’t Know What Time It Was” finds him playing and saying everything melodically and coherently, even though he is still in Trane-ing. I’m partial to Benny before his Trane influence became so great, but here, it is used to properly propel his playing to new heights, unlike, in my opinion, “Blues-ette”, where he simply lost his own voice in favor of his newer mentor. Perhaps having the date in his own name made a difference, I’m not sure, but he’s swingin’ hard and fast, like on “The Stroller” (written by Golson), and Curtis Fuller is flawless, punctuating a lot like Al Grey…and Ray…what IS there to say?! The man does it all. Chambers states his usual wise musical sermon, then Blakey takes it over the top. “Yesterdays” is truly soulful, and both Golson and Fuller (with Ray, of course) give it what it needs. THIS is my kind of star, straight ahead bop-blowing session. It blows “Blue-ette” away.

Clocking in at only 34 minutes, you might think this slight blowing session is not worth the money. But like ‘Blues-ette’ (under trombonist Curtis Fuller’s name) and like his hard-to-find classic, ‘Free,’ this is a Golson gem. I play tenor, and I am continually blown away by 50’s vintage Benny Golson – before he confined himself to tight arrangements that squeezed out his tenor sax improvising, and long before his return to the tenor in the post-bop era, when he drastically and unfortunately changed his tone to a mere shell of its early beauty. In this ’59 session, made while he was forming the Jazztet with Art Farmer and Curtis Fuller, he stretches out on some simple blues patterns and one standard ballad. It’s all done at a swinging tempo that allows Fuller to shine on trombone with near perfect solos; the under-rated Ray Bryant adds his impeccable piano touch (he’s as great as Wynton Kelly or Sonny Clark); Paul Chambers was never better on bass than here, both as accompanist and soloist; and the irrepressible drummer, Art Blakey, makes the whole session sparkle. Backed by this band, Golson is as smooth as butter in tone, and as dazzling in his virtuosity as any tenor player of the times. In my opinion, he was the greatest tenor virtuoso of the 50’s – even better than Sonny Rollins or Johnny Griffin: and that’s sayin’ something! Although this is simply a blowing session on some fairly simple riffs, it is raised to the level of the sublime by consummate musicianship and group chemistry, proving that the most perfect diamonds are the small ones. Add this to your collection of jazz classics. And don’t be put off by tepid reviews on other websites that only give this three stars. Sometimes professional critics have a bad day.