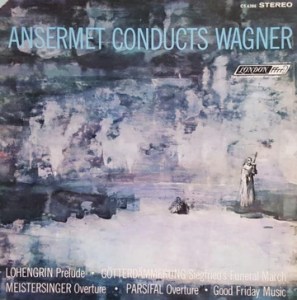 This vintage London pressing has the kind of Tubey Magical Midrange that modern records can barely BEGIN to reproduce. Folks, that sound is gone and it sure isn’t showing signs of coming back. If you love hearing INTO a recording, actually being able to “see” the performers, and feeling as if you are listening live to L’Orchestre De La Suisse Romande in Geneva’s Victoria Hall, this is the record for you. It’s what vintage all analog recordings are known for —this sound.

James Lock was the engineer for these sessions in October of 1963 in Geneva’s glorious sounding Victoria Hall. It’s yet another remarkable disc from the Golden Age of Vacuum Tube Recording.

What We’re Listening For on Ansermet Conducts Wagner

Prelude to Act I of Lohengrin

LOHENGRIN was Wagner’s first internationally recognized masterpiece and the work that officially announced the arrival of a new operatic genius. Not surprisingly, the story is Nordic in its origin and heroic in its progression. The plot centers on a dispute over ducal succession in the Brabant region of the 10th century German Empire. Elsa is accused of murdering her brother, the rightful heir, and must find a champion to defend her claims of innocence. No one comes so she dreams of a knight in a boat drawn by a swan. The knight soon becomes manifest and agrees to aid her so long as she never asks his name. Too curious, she breaks the rule and he is revealed as Lohengrin, a Knight of the Holy Grail who can only live among men in secret. He departs but not before he restores Elsa’s brother, the swan all along, to human form and the dukedom. The Act I Prelude is a musical depiction of the Holy Grail as it descends to the Earth in the care of an Angelic host. It is a masterfully extended orchestral crescendo that builds to a brilliant climax then settles back into its original elemental murmur. Wagner weaves essentially one theme throughout the Prelude but he asks much of it during the course of the opera’s three acts, using it to speak for Lohengrin, Elsa and even the Grail itself at critical moments in the action.

Parsifal (WWV 111) is an opera in three acts by German composer Richard Wagner. It is loosely based on Parzival by Wolfram von Eschenbach, a 13th-century epic poem of the Arthurian knight Parzival (Percival) and his quest for the Holy Grail (12th century).

Wagner conceived the work in April 1857, but did not finish it until 25 years later. It was his last completed opera, and in composing it he took advantage of the particular acoustics of his Bayreuth Festspielhaus. Parsifal was first produced at the second Bayreuth Festival in 1882. The Bayreuth Festival maintained a monopoly on Parsifal productions until 1903, when the opera was performed at the Metropolitan Opera in New York.

Wagner described Parsifal not as an opera, but as Ein Bühnenweihfestspiel (“A Festival Play for the Consecration of the Stage”). At Bayreuth a tradition has arisen that audiences do not applaud at the end of the first act.

Wagner’s spelling of Parsifal instead of the Parzival he had used up to 1877 is informed by one of the theories about the name Percival, according to which it is of Arabic origin, Parsi (or Parseh) Fal meaning “pure (or poor) fool”.