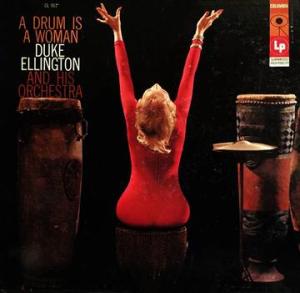 This vintage Columbia 6 Eye Mono pressing has the kind of Tubey Magical Midrange that modern records can barely BEGIN to reproduce. Folks, that sound is gone and it sure isn’t showing signs of coming back. If you love hearing INTO a recording, actually being able to “see” the performers, and feeling as if you are sitting in the studio with the band, this is the record for you. It’s what vintage all analog recordings are known for — this sound.

What We’re Listening For on A Drum Is A Woman

A Drum Is A Woman
Rhythm Pum Te Dum
What Else Can You Do With A Drum
New Orleans
Hey, Buddy Bolden
Carribee Joe
Congo Square

Duke Ellington’s ”Drum Is a Woman,” a jazz allegory with songs by the Duke and Billy Strayhorn and a narrative in the Duke’s ironic and sometimes florid prose, was composed and recorded in 1956. A year later, it was adapted for a television production. In the more than three decades since then, it had never been performed. But on Friday it was given its stage premiere at Symphony Space by an 11-piece orchestra and 3 singers conducted by the pianist and arranger Chris Cherney.

Ellington’s fantasy involves the seductive Madam Zajj, who seeks fame and sophistication, and Carabea Joe, who is drawn to the jungle and its drums. Madam Zajj’s attempts to lure Carabea Joe from the jungle takes them through a quick history of jazz from New Orleans to New York and be-bop, which was the ultimate extension of jazz in 1956.

Unlike other extended Ellington works, which are primarily if not entirely instrumental, ”A Drum Is a Woman” is developed through songs and a narration with only occasional full orchestral passages. It was powerful, rhythmic and kaleidoscopic, with a strong vocal anchor at Friday’s performance in Claudia Hamilton, a commanding presence as Madam Zajj. Luke Dogen’s Carabea Joe was a genial, good-time companion with a strong inner core that emerged in a positively stated love song, ”You Better Know It.”

The narration, originally performed on the recording by Duke Ellington in his jive elegant manner, was taken over by his son Mercer, who hit the right rhythmic and dramatic emphases without attempting to copy his father’s tone. The orchestra was crisp and authoritative, although it sometimes dominated the singing.