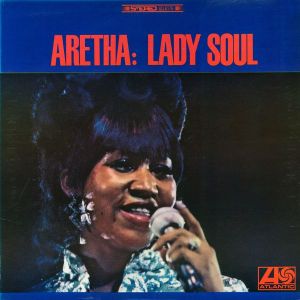 We’ve been playing a lot of Aretha Franklin records lately, working our way through her catalog, but it’s hard to find pressings that separate themselves from the pack to give you audiophile-friendly sound. Too many seem to be optimized more for the radio than for your hi-rez audio rig.

Every now and then, however, we luck into a copy that has the real soul magic in its grooves. On this album, that means Chain Of Fools and Aretha’s great version of Natural Woman will sound just the way you want them to.

This ’60s recording has the kind of Tubey Magical Midrange that modern pressings barely BEGIN to reproduce. Folks, that sound is gone and it sure isn’t showing any sign of coming back.

If you exclusively play modern repressings of older recordings (this one is now close to fifty years old), I can say without fear of contradiction that you have never heard this kind of sound on vinyl. Old records have it — not often, and certainly not always — but less than one out of 100 new records do, if our experience with the hundreds we’ve played can serve as a guide.

What the best pressings of Lady Soul have to offer is not hard to hear:

Most of the Aretha records we’ve played tend to be a bit too bright, which brings out a lot of grit, grain and edge. I don’t want to be presumptuous, but I can’t imagine that’s the sound the Queen Of Soul was going for. A copy like this gives you smoother, sweeter sound with a more natural tonal balance. It makes the music work much better — the sound is easier on the ears and not nearly as fatiguing, plus it lets you turn up the volume good and loud without giving yourself a headache.

What We’re Listening For on Lady Soul

Appearing after a blockbuster debut and a sophomore set that was rather disappointing (in comparison), 1968’s Lady Soul proved Aretha Franklin, the pop sensation, was no fluke. Her performances were more impassioned than on her debut, and the material just as strong, an inspired blend of covers and originals from the best songwriters in soul and pop music…

And just as she’d previously transformed a soul classic (Otis Redding’s “Respect”) into a signature piece of her own, Franklin courageously reimagined songs by heavyweights James Brown, Ray Charles, and the Impressions… Powered by three hit singles (each nested in the upper reaches of the pop Top Ten), Lady Soul became Aretha Franklin’s second gold LP and remained on the charts for over a year.