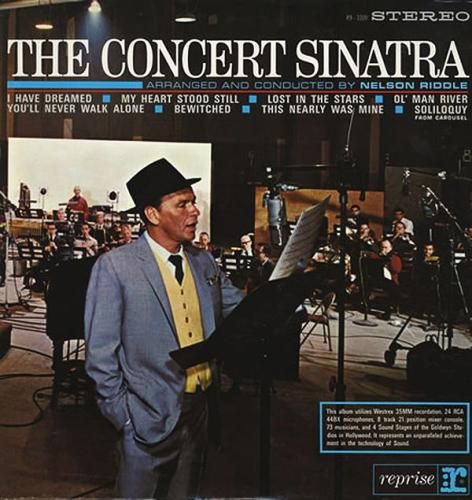 There may be a touch of smear (you can most easily hear it in the strings) but the sound is so RICH and Tubey Magical that you will barely be aware of it. Your attention should be focused on the superb feel the man has for this music.

One thing to pay special attention to, especially if you have other copies of the album, is that Sinatra’s voice on both sides of this pressing always sounds natural even at its loudest. There is no strain or hardness.

That, among many other things, is what separates the best copies from the also-rans (and, of course, all the reissues, which tend to have gritty, harsh vocals which quickly get unbearably edgy in the louder parts).

For audiophiles, the amount of effort that went into the recording, effort that actually paid off, is what will impress the most about The Concert Sinatra. The 73 musicians you see stretched out across the soundstage at Samuel Goldwyn Studios behind Sinatra will give you some idea of the size and scope of the sound. With 24 mics feeding 8 tracks of 35MM recording film, this was the sonic equivalent of Gone With the Wind. No expense or effort was spared.

In this case, plenty.

Mobile Fidelity has remastered this title as part of their Sinatra series. If you like the sound of the records they’re making these days you might want to check it out. It will certainly cost you a lot less than ours will.