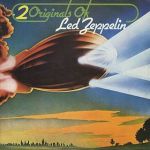 This is a Minty looking German Import Atlantic 2 LP set, consisting of Zep’s first two records. We dropped the needle on all four sides of this record and WOW! Side one of Zep II was SHOCKINGLY GOOD. Big bottom, lots of top, clean vocals — what more could you ask for? Our Rough Hot Stamper Grade: A+ or better. (Side two was more typical for this album, a bit recessed and flat. Oh well.)

On Zep I, again, side one was definitely the stand out. Very clean, punchy, smooth and sweet, and not smeary at all (which is unusual to say the least). Side two was a little midrangy and didn’t have the fullness and warmth that the best copies do.

It’s beyond difficult to find a copy that sounds this good and plays this quietly. But here it is. All four sides play about Mint Minus or so. The cover shows some wear all around the edges, but is still very nice looking. Finding Zep pressings that sound this good and play this quietly is practically unheard of. Those of you who spend much time on the site know how rare Zep Hot Stampers are, a subject we discuss below.

This is an excellent sounding side one for Zep II, with the kind of rock and roll firepower that is guaranteed to bring any system to its knees. I can tell you with no sense of shame whatsoever that I do not have a system powerful enough to play this record at the levels I was listening to it at today. When the big bass came in, hell yeah it distorts. It would have distorted worse at any concert the band ever played. Did people walk out, or ask them to turn down the volume? Not a chance. The volume IS the sound.

That’s what the album is trying to prove. This recording is a statement by the band that they can fuse so much sonic power into a piece of vinyl that no matter what stereo you own, no matter how big the speakers, no matter how many watts you think you have, IT’S NOT ENOUGH.

The music will be so good you be unable to restrain yourself from turning it up louder, and louder, and still louder, making the distortion you hear an intoxicating part of the music. Resistance, as well all know, is futile.

If at the end of a side you don’t feel like you’ve just been run over by a freight train, you missed out on one of the greatest musical experiences known to man: Led Zeppelin at ear splitting levels. If you missed them in concert, and I did, this is the only way to get some sense of what it might have been like. (Assuming you have the room, the speakers and all the other stuff needed to reproduce this album of course. Maybe one out of fifty systems I’ve ever run into fits that bill. But we all try, and it’s good to have goals, don’t you think?)

This has to be the hardest rocking rock album of all time. The best copies — often with the same stampers as the not-as-good copies by the way — have a LIFE and a POWER to them that you just don’t find on many records. Almost none in fact. And certainly I have never heard a CD that sounded remotely like this. I doubt that day will ever come. As long as we have records like this, what difference does it make?

Few clean copies of Zeps Classic First Five Albums can be found in stores these days, and the prices keep going up with no end in sight. The bins full of minty LPs by Pink Floyd, The Stones, Zep, The Beatles, The Who and Classic Rock Artists in general are a thing of the past. Minty pressings like this one are fewer and farther between, plus more expensive, with each passing day. The cost of picking up a minty looking copy that sounds like crap or is full of groove damage is considerable to us. Lucky for you, we buy those records so you don’t have to.

Recorded quickly during Led Zeppelin’s first American tours, Led Zeppelin II provided the blueprint for all the heavy metal bands that followed it. Since the group could only enter the studio for brief amounts of time, most of the songs that compose II are reworked blues and rock & roll standards that the band was performing on-stage at the time. Not only did the short amount of time result in a lack of original material, it made the sound more direct. Jimmy Page still provided layers of guitar overdubs, but the overall sound of the album is heavy and hard, brutal and direct. “Whole Lotta Love,” “The Lemon Song,” and “Bring It on Home” are all based on classic blues songs — only, the riffs are simpler and louder and each song has an extended section for instrumental solos.

Of the remaining six songs, two sport light acoustic touches (“Thank You,” “Ramble On”), but the other four are straight-ahead heavy rock that follows the formula of the revamped blues songs. While Led Zeppelin II doesn’t have the eclecticism of the group’s debut, it’s arguably more influential. After all, nearly every one of the hundreds of Zeppelin imitators used this record, with its lack of dynamics and its pummeling riffs, as a blueprint.