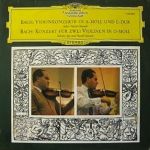 This Minty looking Deutsche Grammophon LP has rich, smooth sound. We didn’t have any other copies to compare it to, but we’ve played enough DG LPs around here to know that the average DG record is nothing to get excited about.

Nowadays we would not be able to sell a record such as this.

Without a proper cleaning and shootout, no record can go up on the site.

It’s the only way we know of to guarantee that the quality would be superior to whatever pressing you have or have heard.

Bach was best known during his lifetime as an organist, organ consultant, and composer of organ works in both the traditional German free genres—such as preludes, fantasias, and toccatas—and stricter forms, such as chorale preludes and fugues.

At a young age, he established a reputation for his great creativity and ability to integrate foreign styles into his organ works. A decidedly North German influence was exerted by Georg Böhm, with whom Bach came into contact in Lüneburg, and Dieterich Buxtehude, whom the young organist visited in Lübeck in 1704 on an extended leave of absence from his job in Arnstadt. Around this time, Bach copied the works of numerous French and Italian composers to gain insights into their compositional languages, and later arranged violin concertos by Vivaldi and others for organ and harpsichord.

During his most productive period (1708–14) he composed several pairs of preludes and fugues and toccatas and fugues, and the Orgelbüchlein (“Little organ book”), an unfinished collection of 46 short chorale preludes that demonstrates compositional techniques in the setting of chorale tunes. After leaving Weimar, Bach wrote less for organ, although his best-known works (the six trio sonatas, the “German Organ Mass” in Clavier-Übung III from 1739, and the Great Eighteen chorales, revised late in his life) were all composed after his leaving Weimar. Bach was extensively engaged later in his life in consulting on organ projects, testing newly built organs, and dedicating organs in afternoon recitals.