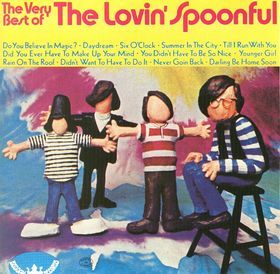 As Good As It Gets (AGAIG) White Hot Stamper sound for some of the biggest hits of The Lovin’ Spoonful, a band I wouldn’t expect to hear sound good on vinyl if I lived to be a hundred, and yet, here it is! This pressing changes EVERYTHING.

This copy lets you hear versions of Younger Girl, Didn’t Want to Have to Do It, Daydream, You Didn’t Have to Be So Nice, Did You Ever Have to Make Up Your Mind?, and Do You Believe in Magic? with the kind of sonics never thought possible, not by us anyway. This copy is truly a revelation. And side two ain’t too shabby either.

Why does this stereo compilation sound so much better than others we’ve played in the past? Who the hell knows? We don’t pretend to have all the answers. What we have — that nobody else has, if that’s not too obvious — are the records that back up what we say about them. How they came to be is anyone’s guess. All we know for sure is that, judging by the best copies of this album somebody got hold of some awfully good tapes and somebody mastered them with uncanny skill to what sounds to these ears like near perfection.

That is, if you have this copy (which just happens to be on the original Pink Kama Sutra Label). This copy just could not be beat on side two. We tried, we had some very very good ones, but none that sounded like this.

This copy had the most extension high and low, the best clarity in the vocals and the most richness overall. I’m telling you, it is Hard To Fault!

A++, with an especially good sounding second track, rich, sweet and tubey. Some copies can be hard and dry but this one solves most of those problems.

On Daydream the edge you hear on the vocals is there on every copy, which means that it’s on the tape. The vocal reproduction on this track was amazingly intimate and clear, with the least amount of edge. The overall tonality is unerringly correct. This side is a big step up over most of what we played, that’s for sure. The shootout winner had more extension at the extremes, something that’s very hard to come by, but this one gets everything else right on the money.

Please click on the Sonic Grade tab above to read more about this copy’s surfaces. There are a few problems.

Sundazed remastered a big batch of this band’s albums and every one we played sounded godawful: dry, flat, lifeless, and practically devoid of harmonics and ambience. You can find many of them with dismal grades in our Heavy Vinyl Scorecard, in the company of other Sundazed disasters from decades past. (The Love albums recommended by Fremer back in the day were every bit as bad. There is a very lengthy commentary on the site about the whole affair.)

Mix magazine interviewed the man back in 2001 about his engineering of some of the later Lovin’ Spoonful sessions.

Was it hard to switch back and forth between, say, the Lovin’ Spoonful and a big pop session?

No, I can’t say it was. One might be a little more challenging than another. You go into the studio with a 70-piece orchestra and you’re doing it live — that was a helluva challenge. You couldn’t spend two hours getting a drum sound, obviously. You had to get it right away. But then a group like the Lovin’ Spoonful was challenging in its own way. You’re working to really capture the sound of the group, and that’s not always easy. I really liked them. John Sebastian was really great to work with. They got a little crazy sometimes, but they were a lot of fun. To cut a record like “Summer in the City,” and watch it go up to Number One and sit there for weeks — that was a ball; it was really thrilling.

Younger Girl
Didn’t Want to Have to Do It
Daydream
You Didn’t Have to Be So Nice
Did You Ever Have to Make Up Your Mind?
Do You Believe in Magic?

This was Kama Sutra’s attempt to replace its two 12-track Best Of albums with a single 12-track album compiling The Lovin’ Spoonful’s hits. It does contain eight of the group’s ten Top Ten hits, missing only “Nashville Cats” and “She Is Still a Mystery,” though oddly it also includes “Till I Run with You” and “Never Going Back,” two songs from the group’s final, inferior phase. Still, upon release, it featured more Spoonful hits on a single album than had ever appeared before.