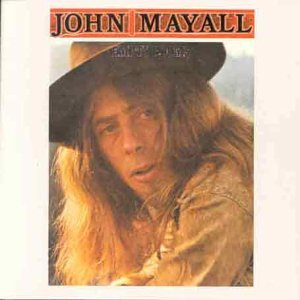 With only keyboards, guitars, saxes and flutes — the absence of a drummer is especially noteworthy — the group creates a mystical, low-key atmosphere in the studio within which JM tells his stories. In other words, it’s different. When it comes to John Mayall’s recorded works, that’s not a bad thing.

We’ve auditioned a good dozen or more of his albums over the years, most of which we found interesting but not especially compelling (not at our prices anyway). He averaged about two albums a year through the ’60s and ’70s and on most of the ones we’ve played it seems that he struggled to come up with material good enough to fill them all.

That said, we took a liking to this one and proudly offer it here for the first time.

The second and third tracks tended to sound better to us than the first by the way.

Natural and balanced, with rich and tubey 1970 sound. The second track is especially Tubey Magical and smooth in the right way.

This was John Mayall’s studio-recorded follow-up to the live The Turning Point, featuring the same drumless quartet of himself, guitarist Jon Mark, reed player Johnny Almond, and bassist Steve Thompson.

Mayall was at a commercial and critical peak with this folk-jazz approach; the album’s leadoff track, “Don’t Waste My Time,” had become his sole singles chart entry prior to the LP’s release, and although his former label, London, confused matters by releasing the two-year-old Diary of a Band, Vol. 1 in the U.S. just before this new album appeared in early 1970, the new crop of fans he’d found with The Turning Point stuck with him on this gentle, reflective release.