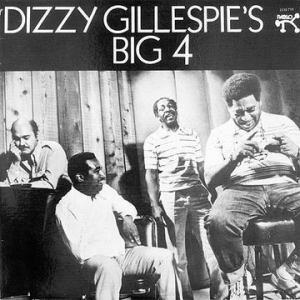 This original Pablo pressing has the kind of Tubey Magical Midrange that modern records rarely even BEGIN to reproduce. Folks, that sound is gone and it sure isn’t showing signs of coming back. If you love hearing INTO a recording, actually being able to “see” the performers, and feeling as if you are sitting in the studio with the band, this is the record for you. It’s what vintage all analog recordings are known for — this sound.

What the best sides of Dizzy Gillespie’s Big 4 form 1975 have to offer is not hard to hear:

What We’re Listening For on Dizzy Gillespie’s Big 4

As great a musician as he was, jazz trumpeter Dizzy Gillespie’s best recorded work seems to be when he shared the bill with other players. His partnership with fellow bop innovator Charlie Parker immediately comes to mind. The classic sides they cut in the 1940s proved to be the foundation for much of jazz in the decades that followed. Later on in his career, album collaborations… also seemed to spur Gillespie toward some inspired playing. So it is great to see Dizzy Gillespie’s Big 4 (shortened to Dizzy’s Big 4 for CD release) still in print, as it is one of his best ensemble performances.

…Joining Gillespie on this 1974 date were guitarist Joe Pass, bass player Ray Brown, and drummer Mickey Roker. Of Roker I don’t know much, but both Pass and Brown had successful solo careers in addition to performing with other musicians. The black-and-white cover shot of the four men, casually dressed and hanging out in a lodge-like room, provides an indication of the relaxed camaraderie between the players.

I bought my copy of Dizzy Gillespie’s Big 4 from a used record store in early 1990, when I was just getting into jazz. It just so happened that Dizzy was coming to town soon for a concert. So, I bought tickets and proceeded to spend the two weeks leading up to his performance devouring the album in the hope that Diz would play something off the album in his concert. He did, his bop classic “Birk’s Works.” The deceptively quiet beat that Brown and Roker lay down only serve to stir up fiery solos from Pass and Gillespie who, as on most of the tracks here, offers up two solos, one with a mute in his bell, and a second solo with his full horn sound.

When I saw him in concert, the then 72 year-old Gillespie deferred to his younger sidemen to handle the more challenging solos. However, on Dizzy Gillespie’s Big 4, his playing is superb and he is in command of the material.

His “Tanga” (renamed “Frelimo” on the CD version) opens up the album in style. It has a laid-back blues feel to it, but after the first couple of bars, Pass fills in with some clipped licks, Brown plucks a few choice chords, Roker hits the skins with a snappy military-march drum solo, and Gillespie growls with his trumpet. It turns out to be a pretty funky opening eight minutes and recalls Gillespie’s interest in Afro-Cuban sounds.

“Be Bop (Dizzy’s Fingers),” another original, is taken at a full gallop. The fellas must have had fun running through this number.

… the musicians play off each other well and do a great job of supporting Gillespie. A big 4, indeed.