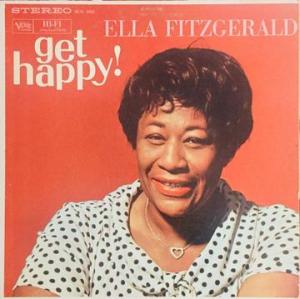 *NOTE: On side two, a small mark makes 1 loud then 1 moderate pop in the middle of track 2, Blue Skies.

The space here is HUGE and the sound so rich. Prodigious amounts of Tubey Magic as well, which is key to the best sounding copies. The sound needs weight, warmth and tubes or you might as well be playing a CD.

This vintage stereo LP has the kind of Tubey Magical Midrange that modern pressings barely BEGIN to reproduce. Folks, that sound is gone and it sure isn’t showing any sign of coming back.

What Hot Stampers of Get Happy! have to offer is not hard to hear:

The key to any Ella recording on Verve is to find the pressing with the most presence, breathiness, richness, tubiness and all the other good stuff that vintage analog records can give you, whilst minimizing the midrangy EQ that plagues many of her albums.

And it can be done. This copy is proof! Hardness and honkiness are no strangers to her records, but the best pressings make the EQ on her vocals sound right for the music.

What separated the best pressings from the others was more than just rich, sweet, full-bodied sound. The better pressings make Ella’s voice dramatically more solid, three-dimensional and real coming out of the speakers. You can hear the nuances of her delivery much more clearly on a copy that sounds as good as this one does.

Copies with rich lower mids and nice extension up top did the best in our shootout, assuming they weren’t veiled or smeary of course. So many things can go wrong on a record. We know, we heard them all. There is a marked tendency on this recording to have a bit of honk or squawk, but our best copies are free from this problem.

We’re glad to report this copy was doing more of what we wanted it to do than most of the other copies we played. And we know a fair bit about Ella’s recordings at this point. As of today we’ve done commentaries for more than a dozen different Ella Fitzgerald albums, and that’s not counting the sixteen (yes, 16!) titles we put in our Hall of Shame.

We’ve searched high and low for her records and played them by the score over the years. We plan to keep a good supply on to the site in the coming years so watch for new arrivals in the Vocal section (linked to the left).

What We’re Listening For on Get Happy!

Want to know what we are on about with all this talk of hardness and brashness? Easy, just play the average copy. Unless you are exceptionally fortunate and chance upon a properly mastered and pressed and cared for copy, you will hear plenty of both.

It’s one of the main reasons we have such a hard time doing shootouts for Ella’s ’50s and ’60s albums. The other of course is the poor condition most copies are in. Few pressings do not have marks that play or damaged grooves. The record players of the ’50s and ’60s, not to mention their owners, were ruinous on the albums of the day.

Obviously we wouldn’t bother if the music and sound weren’t so good. When you are lucky enough to find a copy that sounds as good as this one, you cannot help but recognize that this era for Ella will never be equaled, by her or anyone else.

Moonlight Becomes You
Blue Skies
You Turned The Tables On Me
Gypsy In My Soul
Goody Goody
St. Louis Blues

Recorded during the period of time when Ella Fitzgerald cut her famous series of “songbooks,” this set is a bit of a hodge-podge, drawing its 14 selections from six different dates which find Ella backed by orchestras led by either Nelson Riddle, Frank DeVol, Russ Garcia or Paul Weston.

As usual, Ella uplifts all of the material and her best moments come on “Somebody Loves Me,” a heartfelt “Moonlight Becomes You,” a scat-filled “Blue Skies” and (somewhat surprisingly) “St. Louis Blues.” Although this was not her most essential release, the formerly obscure Get Happy finds Ella Fitzgerald at the peak of her powers.