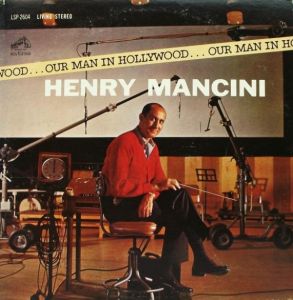 This Minty RCA Living Stereo LP (LSP 2604) has AMAZINGLY Three-Dimensional Tubey Magical Living Stereo Sound on on both sides. Most original LSP pressings, of this or any other LSP title, do not begin to recreate the Studio Wizardry found on this pressing. This wonderful recording rivals the best Chet Atkins and Bob and Rays in all their delicious Cinerama glory.

Thank Al Schmitt for delivering top quality sound on this all tube 1963 recording!

Days of Wine and Roses is a particularly good sounding song on side one, with superb reproduction of both female and male voices, rich and sweet in the best tradition of RCA from the Golden Age.

For us audiophiles both the sound and the music found here are enchanting. If you’re looking to demonstrate just how good 1963 All Tube Analog sound can be, this killer copy may be just the record for you.

THIS is the sound of Tubey Magic. No recordings will ever be made like this again, and no CD will ever capture what is in the grooves of this record. There actually IS a CD of this album, and youtube videos of it too, but those of us with good turntables could care less.

What do we love about these Living Stereo Hot Stamper pressings? The timbre of every instrument is Hi-Fi in the best sense of the word. The instruments here are reproduced with remarkable fidelity. Now that’s what we at Better Records mean by “Hi-Fi”, not the kind of Audiophile Phony BS Sound that passes for Hi-Fidelity these days. There’s no boosted top, there’s no bloated bottom, there’s no sucked-out midrange.

Courtesy of Revolutions in Audio.

In our previous listings we noted:

This is one of those odd records in which the variation in sound quality from track to track is dramatic. Take the first two tracks on side one — they suck. They sound like your average LSP Mancini album, the kind I have suffered through far too many times. And that means bad bad bad.

But track three boasts DEMO DISC QUALITY SOUND and the next one is nearly as good. Listen to that wonderful glockenspiel. It sound every bit as magical as anything on Bang, Baa-room and Harp, and that’s some pretty magical sound in my book!

Same thing happens on side two. Bad sound for the first tracks, then track four sounds great, followed by a pretty good five and a lovely six with a chorus of voices to die for. Go figure.

Is there a copy that sounds good from start to finish? Doubtful.

We’ve made a dozen or more improvements to the system since we last did this shootout, and I’m happy to report that most of the tracks we had trouble with in the past are now sounding very good indeed. Of course the better tracks we noted from years ago are even better, making this a consistently good sounding Mancini record.

One obvious change from the old days is that we now spend a fair amount of time honing in the VTA for every title. That may account for the fact that the first track on side one, which used to be problematical, now sounds wonderful. The value of getting the correct VTA setting — by ear, for every record — cannot be overestimated in our opinion.

Al Schmitt recorded and mixed Our Man In Hollywood and on the best copies it should be clear to all that he knocked it out of the park.

We know his work well; he happens to have been at the controls for many albums with audiophile quality sound: Aja, Hatari, Breezin’, Late for the Sky, Toto IV, as well as some we can’t stand (the entire Diana Krall digital-echo-drenched catalog comes to mind).

The guy’s won 13 Grammy Awards, that ought to tell you something.

Our Man in Hollywood is part of an “Our Man In…” series of albums that pair RCA artists with various cities and regions of the world. Mancini’s volume is connected with Hollywood, and the selections are accordingly drawn from television and movie themes. “Days of Wine and Roses” was a hit for Mancini and was subsequently widely covered.

All of the selections were newly recorded for the album, and many display Mancini’s skill as a composer as well as arranger and conductor. Unlike many of his efforts, Our Man in Hollywood cannot be categorized as an instrumental album because of the unnamed vocal chorus that takes the lead on a number of selections.

If the recognition of one’s peers is the true measure of success, then few men are as successful as composer, arranger, and conductor Henry Mancini. In a career that spanned 40 years, writing for film and television, Mancini won four Oscars and twenty Grammys, the all-time record for a pop artist.

For 1961’s Breakfast at Tiffany’s alone, Mancini won five Grammys and two Oscars. Breakfast at Tiffany’s includes the classic “Moon River” (lyrics by Johnny Mercer), arguably one of the finest pop songs of the last 50 years. At last count, there were over 1,000 recordings of it. His other notable songs include “Dear Heart,” “Days of Wine and Roses” (one Oscar, two Grammys), and “Charade,” the last two with lyrics by Mercer.