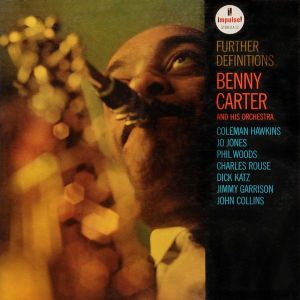 This vintage Impulse stereo pressing has the kind of Tubey Magical Midrange that modern records can barely BEGIN to reproduce. Folks, that sound is gone and it sure isn’t showing signs of coming back. If you love hearing INTO a recording, actually being able to “see” the performers, and feeling as if you are sitting in the studio with the band, this is the record for you. It’s what vintage all analog recordings are known for — this sound.

What We Listen For on Further Definitions

The all-star group (which also includes Hawkins, altoist Phil Woods, Charlie Rouse on second tenor, pianist Dick Katz, guitarist John Collins, bassist Jimmy Garrison, and drummer Jo Jones) performs a particularly inspired repertoire. Carter’s charts, which allow Hawkins to stretch out on “Body and Soul,” give everyone a chance to shine. “Honeysuckle Rose” and “Crazy Rhythm” hold their own with the 1937 versions, and “Blue Star” and “Doozy” prove to be two of Carter’s finest originals. Although Benny Carter was not actively playing much at the time (this was his only small-group recording during 1963-1975), he is heard in typically prime form. Very highly recommended.