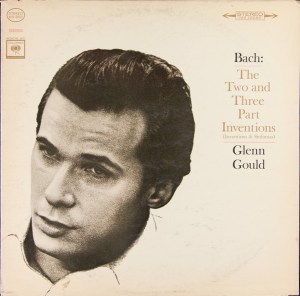 This vintage Columbia stereo pressing has the kind of Tubey Magical Midrange that modern records rarely even BEGIN to reproduce. Folks, that sound is gone and it sure isn’t showing signs of coming back. If you love hearing INTO a recording, actually being able to “see” the performers, and feeling as if you are sitting in the studio with Glenn Gould, this is the record for you. It’s what vintage all analog recordings are known for — this sound.

What the best sides of this wonderful classical release have to offer is not hard to hear:

What We’re Listening For on Gould’s 1964 release

For many, the albums Glenn Gould recorded for Columbia between 1955 and 1981 are documents of unalloyed genius, particularly in his imaginative and masterful performances of Bach’s keyboard works. For others, less enamored of Gould’s recondite theorizing, studio editing, and distracting personal eccentricities (such as humming along out of tune while he played), these recordings are nonetheless fascinating documents of an original mind and still worth studying for their undeniable musicality.

… his 1964 recording of the Two- and Three-Part Inventions, BWV 772-801, was made less than a month before he made his abrupt departure from public performance, and that fact may affect how listeners receive these performances, as if signs of stress are detectable in his interpretations. Not so: Gould’s accurate touch, transparent voicing, smooth legato, and controlled dynamics indicate quite the opposite. If there was any tension affecting Gould at this time, then it led to music-making at its finest…

To this day renowned Canadian pianist Glenn Gould (1932 – 1982) continues to fascinate and entice fans and artists alike. Gould was very forward thinking and embraced technology in a way that was unique among performing artists. Gould has received numerous accolades for his work including four Grammy Awards, three Juno Awards and the RIAA Lifetime Achievement Award. He is one of the best-known and celebrated classical pianists in modern history, with a style that was both deeply expressive and technically precise.

Gould influenced a new generation of performers and listeners through his illuminating interpretations of the music of a variety of composers, including, Gould’s 1956 recording of J.S. Bach’s Goldberg Variations which was re-released last year by his longtime label, Sony Masterworks. Gould’s passion for media and communication technology began with his long association with the Canadian Broadcasting Corporation. In addition to his numerous performances on radio, Gould broke new artistic ground with his documentaries on radio and his television essays and performances.

Gould’s untimely death on October 4, 1982, just days after his 50th birthday, was mourned by music lovers everywhere. Through his recordings and other contributions to the mass media, Glenn Gould has left a rich legacy of musical ideas and performances that find him, each year, the subject of new books, articles, plays, films and documentaries, which continue to challenge and inspire new generations.