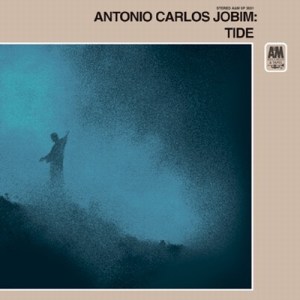 GREAT SOUND ON BOTH SIDES! We’ve been trying our hardest to find a Jobim record with Hot sound, because we love the music so much. It’s taken some time, but we’ve finally found a few magnificent copies of Tide — and this one’s the champ!

Jobim is the master of samba music, and this is one of his best albums! Normally I don’t like flute jazz. The L.A. Four bores me to tears. Herbie Mann has one good album, Live at the Villiage Vanguard (with two string bass players, the only record of its kind that I know of), but the flute works great for Brazilian music, because the music itself is so light and airy, it just fits. You don’t see us recommending too many CDs around here, but the 3-disc Man From Ipanema set is WONDERFUL. (For those looking for Brazilian music with more of a rock influence, we definitely recommend starting with Sergio Mendes’ early A&M albums. If you want to go a bit further, search for some Gilberto Gil or Caetano Veloso.)

It’s beyond difficult to find great sounding copies of Jobim’s albums, but we keep on picking up his records because we love to play them so much. Many of the pressings we bring back are weak sonically, too noisy, or both. Recently, we threw a copy of Tide on the table just for fun, and were thrilled when we heard some promising sound. We hit the shelves and the stores determined to pull together enough copies with the right stampers to make this shootout happen.

Side one of this copy sounds excellent — very rich and sweet. Many times this album sounds veiled , dull and/or murky, but not this one! The sound is airy, open, and sweet with tons of ambience and surprisingly nice presence. The brass has good amounts of breath and brass, the strings have lots of texture, and the flute sounds better than it did on any other copy. We rate side one A+ – A++ — we haven’t heard one that rates any higher, but we’ll reserve our top grade just in case.

Side two sounds even better! From the moment the needle hit the grooves and we heard fluffy, correct sounding tape hiss, we knew we were in for a treat. The sound is open, spacious, and sweet with lovely, rich acoustic guitars. The trombone sounds JUST RIGHT and there’s plenty of deep bass. Like virtually every A&M Jobim album we’ve played, the top end could use just a bit more extension. Add a click of treble and the sound will be OUT OF THIS WORLD!

We’re no strangers to crappy A&M vinyl; we fight it every time we do a Cat Stevens shootout. Side one of this copy plays about Mint Minus Minus with the occasional click and pop. There’s light surface noise behind the music, but we didn’t find it all that objectionable. Side two is quieter — mostly Mint Minus throughout.