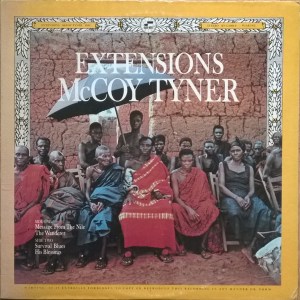 With Alice Coltrane on harp, this is one trippy album! For those with adventurous tastes you are sure to have an interesting musical experience with this one.

We enjoy the sound of a great many Blue Note pressings from the ’70s, although to be fair there are plenty of dogs out there too. The reason this LP and others from the era have such transparency and such an extended top end compared with some of RVG’s older recordings is due, at least to some degree, to the better cutting equipment he had available to him in the ’70s.

The really good RVG pressings (often on the later labels) sound shockingly close to live music — uncompressed, present, full of energy, with the instruments clearly located on a wide and often deep soundstage, surrounded by the natural space and cool air of his New Jersey studio. As our stereo has improved, and we’ve found better pressings and learned how to clean them better, his “you-are-there” live jazz sound has come to impress us more and more.

The true sound of the master tape Rudy Van Gelder has engineered almost never ends up on the record. If it did we’d be out of business by now. You have to work to find the good RVG pressings. When you do find one, they can be as good as any jazz recording you have ever heard.

To belabor the point a bit further, the early pressings, the ones made with the crude cutting equipment of the day, are often going to be lacking in many important respects. Same with any of the imports, especially the Japanese pressings. The fact that many owners of these records have failed to notice their shortcomings is nothing new, and takes nothing away from the pressings that actually do sound good, such as the ones we offer.

The late ’60s and early ’70s were a good time for Rudy Van Gelder. Freddie Hubbard’s Red Clay is from 1970, Grover Washington’s All the King’s Men from 1973, and both are amazing Demo Discs in their own right, one for quintet, one for large group.

But only on the right pressings, another fact that seems to have eluded most jazz vinyl aficionados and at least as many audiophiles.

What We’re Listening For on Extensions

Message from the Nile
The Wanderer

It may be the only recording to include both pianist McCoy Tyner and his successor with the John Coltrane Quartet, Alice Coltrane (who adds atmosphere with her harp).

This set also matches the young altoist Gary Bartz with Wayne Shorter (doubling on tenor and soprano), who he succeeded in Miles Davis’ group, and has reunions between Shorter and bassist Ron Carter and between Tyner and drummer Elvin Jones.

The all-star sextet stretches out on lengthy renditions of four of Tyner’s modal originals, and there is strong solo space for the leader and the two saxophonists. Wayne Shorter in particular is often quite intense. Stimulating music.