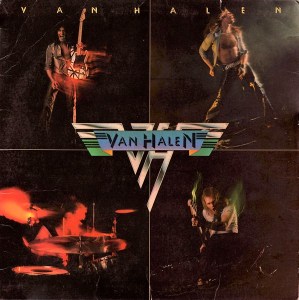 Turn up your nose if you like, but this music is widely considered classic rock by now. I’m not going to pretend it’s on a level with After The Gold Rush or Zep II, but this album does exactly what it’s trying to do — it really ROCKS.

At least it does when you have a pressing as good as this one. The All Music Guide gives the album 5 Big Stars, and I’m sure that more than a few of you out there think it deserves every last one of them.

I’m sure it won’t come as much of a surprise to most of you that the average copy is, well, average sounding. Not bad, just mediocre. It’s not rockin’ all that hard and it’s not all that much fun. You know the kind of record I’m talkin’ about. The music sounds great on the radio, but the record you just picked up from your local Flip Side doesn’t seem to be doing much, and even turning up the volume can’t seem to bring it to life.

The problem you find yourself with is the same problem most people have, but they are in the unfortunate position of not knowing what they are missing. The problem is the mediocrity of most pressings. The world is full of mediocre pressings. We know them well, better than anyone I would venture to say. They’re the kinds of records we wade through all day in shootout after shootout trying to find Hot Stampers.

Most copies just do not have the kind of weight to the bottom and lower mids that this music needs to rock. Put simply, if your Van Halen LP doesn’t rock, then what exactly is the point of playing it?

The other qualities to look for on the better pressings are, firstly, space — the best pressings are huge and three-dimensional, with large, lively, exceptionally dynamic choruses.

Richness is also key — every instrument should be full-bodied and solid, never thin and squawky. The copies with the most resolving power are easy to spot — they display plenty of lovely analog reverb trailing the guitars and vocals.

And lastly (although we could go on for days with this kind of stuff), listen for spit on the vocals. Even the best copies have some sibilance, but the bad copies have much too much and make the sibilance gritty to boot.

Most of the best sounding Doobies Brothers albums are his; more by Van Halen of course; Lowell George’s wonderful Thanks I’ll Eat It Here; Little Feat’s Time Loves a Hero (not their best music but some of their best sound); Carly Simon’s Another Passenger (my favorite of all her albums); and his Masterpiece (in my humble opinion), Captain Beefheart’s mindblowing Clear Spot.

What We’re Listening For on Van Halen’s Debut

Among revolutionary rock albums, Van Halen’s debut often gets short shrift. Although it altered perceptions of what the guitar could do, it is not spoken of in the same reverential tones as Are You Experienced? and although it set the template for how rock & roll sounded for the next decade or more, it isn’t seen as an epochal generational shift, like Led Zeppelin, The Ramones, The Rolling Stones, or Never Mind the Bollocks Here’s the Sex Pistols, which was released just the year before.

But make no mistake, Van Halen is as monumental, as seismic as those records, but part of the reason it’s never given the same due is that there’s no pretension, nothing self-conscious about it. In the best sense, it is an artless record, in the sense that it doesn’t seem contrived, but it’s also a great work of art because it’s an effortless, guileless expression of what the band is all about, and what it would continue to be over the years.

The band did get better, tighter, over the years — peaking with their sleek masterpiece 1984, where there was no fat, nothing untidy — but everything was in place here, from the robotic pulse of Michael Anthony and Alex Van Halen, to the gonzo shtick of David Lee Roth to the astonishing guitar of Eddie Van Halen.

They still sound vital, surprising, and ultimately fun — and really revolutionary, because no other band rocked like this before Van Halen, and it’s still a giddy thrill to hear them discover a new way to rock on this stellar, seminal debut.

The DCC and One Customer’s Take

As I recall it wasn’t very good — thick and dull and closed-in; in other words, boring — but it was quite a while ago that I played it. If your copy sounds better, more power to you, but I bet it doesn’t.

Any copy we sell is guaranteed to blow the doors off of it — as well as any other pressing you own — or your money back.