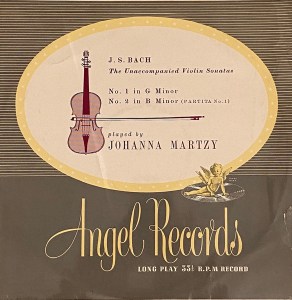 This Minty British “Sitting Angel” pressing has Super Hot Stamper sound on side two, reproducing accurately the sound of a solo violin in what sounds to us like a fairly lively and resonant rehearsal hall. Perhaps accurately is not the right word, since obviously none of us have ever set foot in whatever room the music was recorded in. “Realistic” might be a better choice in that regard, since the sound is believable for what we would expect that room might have contributed to the sound we hear on the pressing in hand.

Interestingly, the sound on side two is a tad better than side one — the violin is more present and warm, the room less resonant (in a good way).

For those of you familiar with collectible violinists, Johanna Martzy’s recordings are as collectible and rare as they come. The complete 3 LP set on EMI goes for more than five thousand dollars! (And people say our records are expensive.)

This version on Angel regularly fetches something in the range of two hundred dollars or more, and not only is this copy fairly quiet, but the sound is sure to be better than whatever copy you might randomly find on ebay.

A+ to A++, REAL, clear and natural but somewhat crude and old school. Reproduces the space in a hard room realistically to these ears.

A++ Super Hot, even better as noted above.

Johanna Martzy’s solo J.S. Bach, which has acquired iconic status, is well played technically and very satisfying. Deploying the sturdy rhythm and glowing tone that are features of all her recordings, she gives balanced, middle-of-theroad interpretations, unhurried and free of self-indulgence. The three original LPs were well received on both sides of the Atlantic. In America the New York Herald Tribune chose the set as one of its recordings of 1956. In England Edward Greenfield of The Manchester Guardian remarked on Martzy’s ‘luscious vibrato’ but was not bothered by it; and on a later occasion he preferred her set of the Sonatas and Partitas to that of Jascha Heifetz.

Desmond Shawe-Taylor of The Observer recommended her recordings ‘for sound musicianship and sustained sweetness of tone’. Interestingly, the question of her vibrato was also brought up by Schonberg after her New York début: ‘Her Bach was anything but purist and “classic” in conception. She approached the music with decisive rhythm and a good deal of vibrato (perhaps a little too much vibrato, in the slow movement; but this is a question of taste).’ Although he was writing about a concerto – and his remarks are borne out by live Martzy recordings of the Bach solo concertos – the points he makes are equally applicable to her unaccompanied Bach.

Her interpretations are directly in the tradition of Hungarian fiddlers such as Szigeti, Telmányi and Varga: her native flair and unshowy virtuosity make up for any ‘romantic’ habits in her playing.

The Sonatas and Partitas for solo violin (BWV 1001–1006) are a set of six works composed by Johann Sebastian Bach. They consist of three sonatas da chiesa, in four movements, and three partitas, in dance-form movements.

The set was completed by 1720, but was only published in 1802 by Nicolaus Simrock in Bonn. Even after publication, it was largely ignored until the celebrated violinist Josef Joachim started performing these works. Today, Bach’s Sonatas and Partitas are an essential part of the violin repertoire, and they are frequently performed and recorded.

The Sei Solo – a violino senza Basso accompagnato, as Bach titled them, firmly established the technical capability of the violin as a solo instrument. The pieces often served as an archetype for solo violin pieces for the following generations of composers including Eugène Ysaÿe, Béla Bartók.

The tradition of polyphonic violin writing was already well-developed in Germany, particularly by Biber, Johann Heinrich Schmelzer, and the composers of the so-called Dresden school – Johann Jakob Walther and Westhoff. Bach’s Weimar and Köthen periods were particularly suitable times for composition of secular music, for he worked as a court musician. Bach’s cello and orchestral suites date from the Köthen period, as well as the famous Brandenburg concertos and many other well-known collections of instrumental music.

The sonatas each consist of four movements, in the typical slow-fast-slow-fast pattern of the sonata da chiesa. The first two movements are coupled in a form of prelude and fugue. The third (slow) movement is lyrical, while the final movement shares the similar musical structure as a typical binary suite movement. Unlike the sonatas, the partitas are of more unorthodox design. Although still making use of the usual baroque style of allemande, courante, sarabande, and gigue, with some omissions and the addition of galanteries, new elements were introduced into each partita to provide variety.