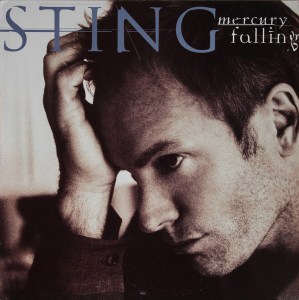 We had some brand new, long out of print Universal Heavy Vinyl pressings of this Sting title sitting on the shelf and decided that, since this was one of the better pressings they’d remastered, perhaps a shootout was in order for fans of Der Stingle.

Sure enough no side of any copy sounded the same as the side of any other copy, which just goes to prove that, regardless of how carefully you master and press your records, there will always be sonic variations from copy to copy –if your stereo is capable of revealing them.

Since you’re on our site I’m guessing that your stereo must be pretty good, which means that our copies of Mercury Falling will be much more enjoyable than you might expect.

On the positive side the sound was fairly rich and ANALOG sounding on most copies, not at all the artificially clean and clear sound one would expect to hear on the CD and most Heavy Vinyl being produced these days. (We are not fans of either FYI.)

A+. Not nearly on the same level as side two but better than the average copy. Sting’s vocals are rich, smooth and present.

A+++. This is As Good As It Gets folks! It’s SUPER open and spacious with a three-dimensional quality that you just won’t find on the average copy. The vocals are clean and clear and the bass sounds excellent.

The title of his new album, Mercury Falling, is a typical Sting gesture — it has the warmth of intelligence and the chill of self-regard. A tightly packed metaphor indeed, it is freighted with all the baggage we’ve come to expect from its author: puns, high cultural allusions, megalomania. Let’s see.we have the onset of winter (read: depression, dashed hopes). We have — surprise! — Sting identifying with a god, the quicksilver Roman deity of messengers and thieves (commerce, too, fittingly). What’s more, Mercury’s not zipping along like he does on the FTD logo — he’s falling. The message of Sting’s sixth solo album of new material is that life on Olympus, while undoubtedly finer than it is for you or me, can be hell. Rock gods take headers too.

Sting may fancy himself a mercurial trickster; in fact, he’s a paragon of consistency who turns out album after high-grade album, their proportions constant: two-thirds inspired pop rock, one-third naked ego. Mercury Falling is as first-rate a piece of craftsmanship as its predecessors. If anything, it’s tauter, more shipshape, and richer in hooks — closest thing yet to Sting’s pure pop album.

If Sting is more in command of his art than ever, life isn’t so cooperative. Coursing through these songs is a control freak’s struggle to accept his lack of control. Lovers leave, moods swing, innocents die violently. ”I’m as dark as December/I’m as cold as the Man in the Moon,” sings the abandoned lover on the album’s stately, ominous opener, ”The Hounds of Winter.” Somberness turns to horror on ”I Hung My Head,” with its nightmarish scenario that unfolds implacably over a staggered, unsettling rhythm. From the first lines — ”Early one morning/With time to kill/I borrowed Jeb’s rifle/And sat on the hill” — we know someone’s going to die.

The casually shaggy ”I’m So Happy I Can’t Stop Crying,” about a guy whose marriage has unraveled, may be the album’s most appealing track. The lyric has the tang of felt life — either Sting has been through some rough patches lately or he’s a better supplier of fictional detail than one thought: ”She says the kids are fine/And that they miss me/Maybe I could come and babysit sometime.” The incongruous bounciness, courtesy of a pedal steel guitar and a country lope, is a stroke of brilliance. Without it, the song would be bathetic; with it, Sting nails the precise mood he’s after — heartbreak without self-pity.

As if to shake his foul spirits, Sting, with the help of the Memphis Horns and longtime collaborators guitarist Dominic Miller, keyboardist Kenny Kirkland, and drummer Vinnie Colaiuta, takes a three-song flier at Memphis R&B. As a British blue-eyed soul man, he won’t cause Steve Winwood any sleepless nights, but he gives the best of these tunes, ”You Still Touch Me,” a genuine workout. The singer’s in nautical mode on ”Valparaiso,” a beautifully evocative sequel to The Soul Cages’ cathartic sea tales.

Soul music and sea fantasies are two ways to stave off despair, but Mercury Falling offers another, deeper vision of redemption: accepting defeat and moving on. Starting as a mournful English ballad, ”I Was Brought to My Senses” kicks into a sort of north-country samba, a moving, quietly exultant paean to nature: ”I walked out this morning/It was like a veil had been removed from before my eyes.” The album closes with the prayerlike ”Lithium Sunset” (”Fill my eyes/…And take this lonesome burden/Of worry from my mind”), whose pretty melody and jogging beat — it’s another nominally country tune — give the song a guarded optimism, the careworn narrator heading for tomorrow, nursing his wounds.

Whether we loathe, admire, or profess indifference to him, few pop musicians engage our emotions as fully as Sting. He knows it, too. If his self-knowledge has increased, so has his awareness of his public persona — and his ability to play on our conflicting emotions. The album’s last three words — ”See Mercury falling” — are as loaded as the title they echo. Is Sting tauntingly inviting us to enjoy watching him take a spill? Or is he mocking his own hubris, and with the most candid admission of vulnerability he has ever made: ”I’m falling”? Maybe what Sting is telling us is that he has learned something new (though he’d probably never quote anything as humble as a proverb): Pride goeth before a fall.