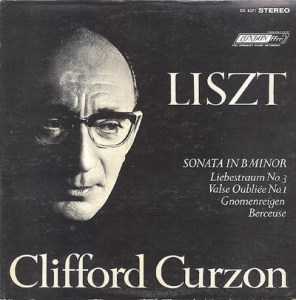 This Super Hot Stamper solo piano record is 1963 Decca recording technology at its finest (or would be if we had ten copies to shoot out and could find the White Hot Stamper pressing hidden among them).

As it is, we are happy to have found this one, Super Hot on both sides, an amazingly realistic representation of a piano. You will have a hard time finding better.

And the music, especially on side two, is compelling and wonderful. This is classical music that will engage you at the deepest and most serious level. Widely considered Liszt’s masterpiece, in Curzon’s forceful hands it is not hard to understand why.

A++ Super Hot Stamper sound, with a clear piano surrounded in space. Present and dynamic, there is little to fault here, save a touch of smear and a slight lack of weight.

Real pianos in live recitals have weight that I have never heard reproduced by any stereo system, so “real weight” is a relative term, one that applies more to recordings than to the live instrument itself.

A++ Super Hot Stamper sound again, but slightly different (of course). This side has a bit more weight than side one, but also a bit more smear, so we’ve called it a draw and graded both sides Super Hot.

Piano Sonata in B Minor

Liebestraum in A Flat No. 3
Valse Oubliee No. 1
Gnomenreigen
Berceuse

It took a long time for the Sonata to become commonplace in concert repertoire both because of its technical difficulty and negative initial reception because of its status as “new” music. However by the early stages of the twentieth century, the piece had become established as a pinnacle of Liszt’s repertoire and has been a popularly performed and extensively analyzed piece ever since.