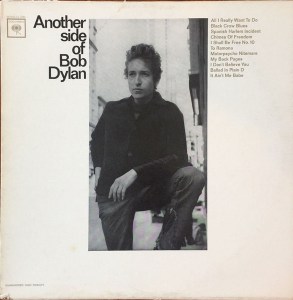 This early mono pressing has the kind of Tubey Magical Midrange that modern pressings barely BEGIN to reproduce. Folks, that sound is gone and it sure isn’t showing any sign of coming back.

If you exclusively play modern repressings of older recordings (this one is now 55+ years old), I can say without fear of contradiction that you have never heard this kind of sound on vinyl. Old records have it — not often, and certainly not always — but less than one out of 100 new records do, if our experience with the hundreds we’ve played can serve as a guide.

What the best sides of this groundbreaking More-Than-Just-Folk-Music Album have to offer is not hard to hear:

It’s tough to find copies of this album that give you all the tubey richness and warmth that this music needs to sound its best. Too many copies, especially of the ’70s Red Label reissue variety, seem to be EQ’d to put the vocals way up front, an approach that often makes Dylan’s voice hard and edgy. Copies like that sound impressive at first blush (“Wow, he’s really IN THE ROOM!”) but become fatiguing in short order.

While Dylan’s albums may not be big-production sonic spectacles – he played every instrument on the album himself – hearing these great songs sound so intimate and lifelike on a top quality pressing can be a sublime experience. We should know; we enjoyed the hell out of this copy.

What We’re Listening For on Another Side of Bob Dylan

All I Really Want to Do
Black Crow Blues
Spanish Harlem Incident
Chimes of Freedom
I Shall Be Free No. 10
To Ramona

Another Side of Bob Dylan is a more varied record and it’s more successful, too, since it captures Dylan expanding his music, turning in imaginative, poetic performances on love songs and protest tunes alike.

This has an equal number of classics to its predecessor, actually, with “All I Really Want to Do,” “Chimes of Freedom,” “My Back Pages,” “I Don’t’ Believe You,” and “It Ain’t Me Babe” standing among his standards, but the key to the record’s success is the album tracks, which are graceful, poetic, and layered.

Both the lyrics and music have gotten deeper and Dylan’s trying more things — this, in its construction and attitude, is hardly strictly folk, as it encompasses far more than that. The result is one of his very best records, a lovely intimate affair.

These are his albums through 1989, after which you are on your own. The later recordings have never sounded right to us and we have no plans to do shootouts for those releases.