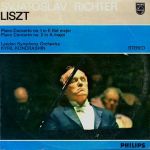 This A++++ Beyond White Hot Stamper 2-pack has sound that must be experienced to be believed! The finest Liszt 1st & 2nd Concertos we know of for performance and unquestionably for sound when they sound like this. More like LIVE MUSIC than any classical recording I have played in longer than I care to remember – both sides are so big, rich and transparent we guarantee you have never heard a better piano concerto.

Richter and Kondrashin deliver the finest Liszt 1st & 2nd Piano Concertos I know of, musically, sonically and in every other way. Richter’s performance here is alternately energetic and lyrical, precisely as the work demands. The recording itself is explosively dynamic. The brass is unbelievably full, rich and powerful. You won’t find a better recording of this music anywhere, and on side two this pressing just cannot be beat. It’s BEYOND White Hot (A++++). There was simply no other copy on any side that was close to it.

Big and rich (always a problem with piano recordings: you want to hear the percussive qualities of the instrument, but few copies can pull it off without sounding thin). We love the BIG, FAT, Tubey Magical sound of this recording! The piano is HUGE and powerful — like a real piano.

Huge hall, weight and energy, this is DEMO DISC QUALITY SOUND by any standard.

As we noted above, the best pressings of this album are more like LIVE MUSIC than any other classical recording I have played in longer than I can remember. I don’t know of another piano concerto recording that more correctly captures the relationship between the piano and the orchestra. The piano is huge and powerful, yet the percussive and lighter qualities on the instrument are clearly heard in proper relation to the orchestra as a whole.

One of these killer sides came from Holland. The other pressing was made in Italy. Which country produced the consistently best sounding pressings of the album? Both! Neither!

For any given side, one country’s pressings might be better than another’s, and thinking that you can predict the results of the shootout is foolish indeed.

Audiophiles are often surprised when they hear that an LP can sound amazing on one side and mediocre on the other, but since each side is pressed from different metalwork which has been aligned independantly, and perhaps even cut by different mastering engineers from tapes of wildly differently quality, in our experience it happens all the time. In fact it’s much more common for a record to earn different sonic grades for its two sides than it is to rate the same grade. That’s just the way it goes in analog, where there’s no way to know how a any given side of a record sounds until you play it, and, more importantly, in the world of sound everything is relative.

This is a great record for adjusting tracking weight, VTA, azimuth and the like. Classical music is really the ultimate test for proper turntable/arm/cartridge setup (and evaluation). A huge and powerful album like this can really separate the men from the boys stereo-wise. Recordings such as this are the reason there are $10,000+ front ends in the first place. You don’t need to spend that kind of money to play this record, but if you do, this is the record that will show you what you got for all that dough.

Ideally you would want to work your setup magic at home with this record, then take it to an audiophile friend’s house and help him with his own setup. I’ve done this sort of thing for years (sadly, not so much anymore because nobody I know can play records like these the way we can. Playing and critically evaluating records all day, every day, year after year, you get pretty good at it. And the more you do it, the easier it gets).

This record originally came out as a Mercury, recorded by Robert Fine and Wilma Cozart, mastered by George Piros, the legendary Mercury team of renown. It is instructive to note that the Philips mastering is dramatically superior to the mediocre Mercury mastering, which may strike you as counterintuitive, but is nonetheless a fact. It’s precisely the reason we play records all day here at Better Records. You can’t judge a record by its credentials. The only way to know how it sounds is to play it, and to really know how it sounds you must play it against a sizeable number of other copies. Then, and only then, can you talk knowledgeably about the sound. (Note to forum posters: this means you.)

The main themes of Liszt’s first piano concerto are written in a sketchbook dated 1830, when Liszt was nineteen years old. He seems to have completed the work in 1849, yet made further adjustments in 1853. It was first performed at Weimar in 1855, with the composer at the piano and Berlioz conducting. Liszt made yet more changes before publication in 1856. Bartók wrote of the work as being “the first perfect realisation of cyclic sonata form, with common themes being treated on the variation principle”. The movements of the piano concerto are played without a break, though some recordings do separate the piece into 2, 3, or 4 different sections.

Franz Liszt wrote drafts for his Concerto for Piano and Orchestra No. 2 in A Major, no. 125 in Humphrey Searle’s catalog of Liszt’s works, during his virtuoso period, in 1839 to 1840. He revised it in several stages, ending in 1861. This concerto typically lasts about 20 minutes. This concerto is one single, long movement, which divide into four sections connected by transformations of several themes. The opening theme is heard throughout the piece, and a version of the theme of the scherzo-like section in B-flat minor is heard as a march in E major later in the work, for instance. The work has not proven as popular as the composer’s first piano concerto but has stayed in the repertoire.

The largest and best known portion of Liszt’s music is his original piano work… Liszt’s piano works are usually divided into two classes. On the one hand, there are “original works”, and on the other hand “transcriptions”, “paraphrases” or “fantasies” on works by other composers…

Liszt also made piano arrangements of his own instrumental and vocal works. Examples of this kind are the arrangement of the second movement “Gretchen” of his Faust Symphony and the first “Mephisto Waltz” as well as the “Liebesträume No. 3” and the two volumes of his “Buch der Lieder”.