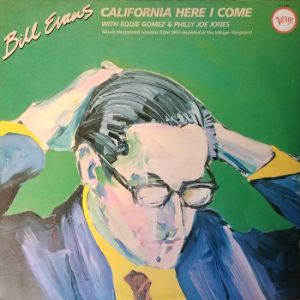 This Verve T-Label pressing has the kind of Tubey Magical Midrange that modern records rarely even BEGIN to reproduce. Folks, that sound is gone and it sure isn’t showing signs of coming back. If you love hearing INTO a recording, actually being able to “see” the performers, and feeling as if you are there, live at Village Vanguard in New York City with the band, this is the record for you. It’s what vintage all analog recordings are known for — this sound.

What the best sides of California Here I Come have to offer is not hard to hear:

What We’re Listening For on California Here I Come

Round Midnight
Emily
Wrap Your Troubles In Dreams

Philly Joe Jones was a member of the Bill Evans Trio for a short time in 1967 but none of his recordings with the pianist were released at the time. This two-LP set from 1982 features the pair (along with bassist Eddie Gomez who had recently started his own longtime association with Evans) in superb form.

Jones consistently lit a fire under the pianist and, even though Bill Evans was never just an introspective ballad pianist (which became his stereotype), he does play with some unaccustomed ferocity on several of these selections. The 71 minutes of music feature strong versions of three of Evans’ originals … Well worth searching for.

This trio swings and sparkles through a varied song-list that includes show tunes, some jazz standards and a few originals. Group improvisation is still paramount but the rigid song structures ensured there was little of the castles-in-the-clouds meandering that was prominent on many Bill Evans Trio recordings. Loyal fans, of course, will happily listen to Evans play an hour of scales, but for casual listeners, there is much here to be engaged by.