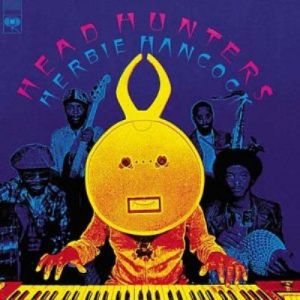 Jazz-fusion fans are going to have themselves a funky good time with this Hot Stamper copy of Head Hunters! Let me tell you, it is no mean feat to find a copy of this album with this kind of sound. This copy is dynamic and lively with the kind of extension up top that brings this music to life. The bottom end has the kind of weight that these funky tunes demand, and the percussion sounds right on the money.

This vintage Columbia pressing has the kind of Tubey Magical Midrange that modern records rarely even BEGIN to reproduce. Folks, that sound is gone and it sure isn’t showing signs of coming back. If you love hearing INTO a recording, actually being able to “see” the performers, and feeling as if you are sitting in the studio with Hancock and the band, this is the record for you. It’s what vintage all analog recordings are known for — this sound.

What the best sides of Head Hunters have to offer is not hard to hear:

What We’re Listening For on Head Hunters

Head Hunters was a pivotal point in Herbie Hancock’s career, bringing him into the vanguard of jazz fusion. Hancock had pushed avant-garde boundaries on his own albums and with Miles Davis, but he had never devoted himself to the groove as he did on Head Hunters. Drawing heavily from Sly Stone, Curtis Mayfield, and James Brown, Hancock developed deeply funky, even gritty, rhythms over which he soloed on electric synthesizers, bringing the instrument to the forefront in jazz. It had all of the sensibilities of jazz, particularly in the way it wound off into long improvisations, but its rhythms were firmly planted in funk, soul, and R&B, giving it a mass appeal that made it the biggest-selling jazz album of all time (a record which was later broken). Jazz purists, of course, decried the experiments at the time, but Head Hunters still sounds fresh and vital decades after its initial release, and its genre-bending proved vastly influential on not only jazz, but funk, soul, and hip-hop.