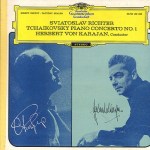 Phil is a long time customer who shares my love for Richter and Karajan’s powerful and exceptionally well-recorded performance of Tchaikovsky’s 1st Piano Concerto.

He knows full well how bad most copies sound — he has a few of his own to prove it. When he saw this beauty in the mailer he did what any self-respecting record lover would do: he jumped on it. Even at $500 he feels he got his money’s worth, and that’s a lot of money for a Deutsche Grammophon record, the kind that no record store in the world would charge more than ten or twenty dollars for. If only we could find more like it…

You called it exactly right. The opening salvo by the orchestra gave me chills, and I knew I was hearing something extraordinary. In spite of tutti mayhem, the sound and performance is operatic and thrilling. I’m surprised you parted with this one.

Phil, years ago I used to say on the site that the best copies go in my collection, but that hasn’t been true for quite some time now. I have about ten records in my collection that I’m keeping for one reason or another, and everything else goes into the shootouts we do around here. (I may list my own collection on the site one of these days. You could type up the whole list in twenty minutes.)

Good records should be played, and when do I have time to play records for myself? We spin the damn things all day long. Monday through Friday, the VPI is booked. On the weekends I like a little peace and quiet; can you blame me? So better that you have an amazing record like that to play. I’ll just be content with the memory of the sound — until we do the next shootout of course. Then we’ll play it all day long and I’ll have a chance to really get back into again.

The performance on that record is really one for the ages. I hope we find a Hot Stamper that sounds as good as the one you bought. I don’t expect to, but it sure would be nice for someone else to have the chance to hear that recording at its best.

These days, when the music of Tchaikovsky is among the most popular in the repertory, it is difficult to imagine the composer as a young man, known only to a limited public and trying valiantly to solve that most pressing of all problems for the budding artist—making a living. In 1874 he was teaching at the Moscow Conservatory and writing music criticism for a local journal. Those duties provided a modest income, but Tchaikovsky’s real interest lay in composition, and he was frustrated with the time they took from his creative work. He had already stolen enough hours to produce a sizeable body of music, but only Romeo and Juliet and the Symphony No. 2 had raised much enthusiasm.

At the end of the year, he began a piano concerto with the hope of having a success great enough to allow him to leave his irksome post at the Conservatory. By late December, he had largely sketched out the work, and, having only a limited technique as a pianist, he sought the advice of Nikolai Rubinstein, director of the Moscow Conservatory and an excellent player. Tchaikovsky reported on the interview in a letter:

“On Christmas Eve 1874…Nikolai asked me…to play the Concerto in a classroom of the Conservatory. We agreed to it….I played through the first movement. Not a criticism, not a word. Rubinstein said nothing….I did not need any judgment on the artistic form of my work; there was question only about its mechanical details. This silence of Rubinstein said much. It said to me at once: ‘Dear friend, how can I talk about details when I dislike your composition as a whole?’ But I kept my temper and played the Concerto through. Again, silence.

“‘Well?’ I said, and stood up. There burst forth from Rubinstein’s mouth a mighty torrent of words. He spoke quietly at first; then he waxed hot, and at last he resembled Zeus hurling thunderbolts. It appeared that my Concerto was utterly worthless, absolutely unplayable; passages were so commonplace and awkward that they could not be improved; the piece as a whole was bad, trivial, vulgar. I had stolen this from that one and that from this one; so only two or three pages were good for anything, while the others should be wiped out or radically rewritten. I cannot produce for you the main thing: the tone in which he said all this. An impartial bystander would necessarily have believed that I was a stupid, ignorant, conceited note-scratcher, who was so impudent as to show his scribble to a celebrated man.”

Tchaikovsky was furious, and he stormed out of the classroom. He made only one change in the score: he obliterated the name of the original dedicatee—Nikolai Rubinstein—and substituted that of the virtuoso pianist Hans von Bülow, who was performing Tchaikovsky’s piano pieces across Europe. Bülow gladly accepted the dedication and wrote a letter of praise to Tchaikovsky as soon as he received the score: “The ideas are so original, so powerful; the details are so interesting, and though there are many of them they do not impair the clarity and unity of the work. The form is so mature, so ripe and distinguished in style; intention and labor are everywhere concealed. I would weary you if I were to enumerate all the characteristics of your work, characteristics which compel me to congratulate equally the composer and those who are destined to enjoy it.”

After the scathing criticism from Rubinstein, Tchaikovsky was delighted to receive such a response, and he was further gratified when Bülow asked to program the premiere on his upcoming American tour. The Concerto created such a sensation when it was first heard, in Boston on October 25, 1875, that Bülow played it on 139 of his 172 concerts that season. (Remarkably, Tchaikovsky’s Second Piano Concerto was also premiered in this country, by Madeleine Schiller and the New York Philharmonic Society conducted by Theodore Thomas on November 12, 1881.) Such a success must at first have puzzled Rubinstein, but eventually he and Tchaikovsky reconciled their differences over the work. Tchaikovsky incorporated some of his suggestions in the 1889 revision, and Rubinstein not only accepted the Concerto, but eventually made it one of the staples of his performing repertory.

During the next four years, when Tchaikovsky wrote Swan Lake, the Rococo Variations, the Third and Fourth Symphonies, the Violin Concerto, and, in 1877, met his benefactress Nadezhda von Meck, he was not only successful enough to leave his teaching job to devote himself entirely to composition, but he also became recognized as one of the greatest composers of his day.

Tchaikovsky’s First Piano Concerto opens with the familiar theme of the introduction, a sweeping melody nobly sung by violins and cellos above thunderous chords from the piano. After a brief cadenza for the soloist, the theme—which is not heard again anywhere in the Concerto—is presented a second time in an even grander setting. Following a decrescendo and a pause, the piano presents the snapping main theme. (Tchaikovsky said that this curious first theme was inspired by a tune he heard sung by a blind beggar at a street fair.)

Following a skillful discussion of the opening theme by piano and woodwinds, the clarinet announces the lyrical, bittersweet second theme. A smooth, complementary phrase is played by the violins. This complementary phrase and the snapping motive from the main theme are combined in the movement’s impassioned development section. The recapitulation returns the themes of the exposition in altered settings. (The oboe is awarded the second theme here.) An energetic cadenza and a coda derived from the second theme bring this splendid movement to a rousing close.

The simplicity of the second movement’s three-part structure (A–B–A) is augured by the purity of its opening—a languid melody wrapped in the silvery tones of the solo flute, accompanied by quiet, plucked chords from the strings. The piano takes over the theme, provides it with rippling decorations, and passes it on to the cellos. The center of the movement is of very different character, with a quick tempo and a swift, balletic melody. The languid theme and moonlit mood of the first section return to round out the movement.

The crisp rhythmic motive presented immediately at the beginning of the finale and then spun into a complete theme by the soloist dominates much of the last movement. In the theme’s vigorous full-orchestra guise, it has much of the spirit of a robust Cossack dance. To balance the impetuous vigor of this music, Tchaikovsky introduced a contrasting theme, a romantic melody first entrusted to the violins. The dancing Cossacks repeatedly advance upon this bit of tenderness, which shows a hardy determination to dominate the movement. The two themes contend, but it is the flying Cossacks who have the last word to bring this Concerto to an exhilarating close.