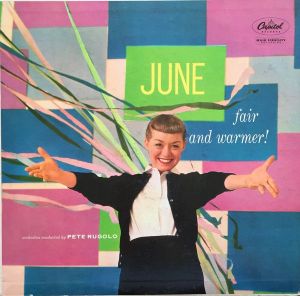 Having done this for so long, we understand and appreciate that rich, full, solid, Tubey Magical sound is key to the presentation of this primarily vocal music. We rate these qualities higher than others we might be listening for (e.g., bass definition, soundstage, depth, etc.). The music is not so much about the details in the recording, but rather in trying to recreate a solid, palpable, real June Christy singing live in your listening room. The best copies have an uncanny way of doing just that.

If you exclusively play modern repressings of older recordings (this one is now 62 years old), I can say without fear of contradiction that you have never heard this kind of sound on vinyl. Old records have it — not often, and certainly not always — but less than one out of 100 new records do, if our experience with the hundreds we’ve played can serve as a guide.

The Midrange Is Key

What We Listen For on Fair and Warmer!

This Capitol LP, one of many that June Christy cut during the 1950s, features her soft but swinging vocals accompanied by a 12-piece group arranged by Pete Rugolo. While the backup musicians include trumpeter Don Fagerquist, trombonist Frank Rosolino, altoist Bud Shank, and tenor saxophonist Bob Cooper (all of whom are unidentified in the very brief liner notes), the cool-toned singer is the main star. Highlights include a definitive “I Want to Be Happy,” “Imagination,” “When Sunny Gets Blue,” and “It’s Always You.” All of June Christy’s Capitol dates are well worth picking up.

Though she was the epitome of the vocal cool movement of the 1950s, June Christy was a warm, chipper vocalist able to stretch out her impressive voice on bouncy swing tunes and set herself apart from other vocalists with her deceptively simple enunciation.

Christy’s debut LP for Capitol, 1954’s Something Cool, was recorded with Rugolo at the head of the orchestra. The album launched the vocal cool movement and hit the Top 20 album charts in America, as did a follow-up, The Misty Miss Christy. Her 1955 Duet LP paired her voice with Kenton’s piano, while most of her Capitol LPs featured her with various Kenton personnel and Rugolo (or Bob Cooper) at the head of the orchestra.

She reprised her earlier big-band days with 1959’s June Christy Recalls Those Kenton Days, and recorded a raft of concept LPs before retiring in 1965. Christy returned to the studio only once, for 1977’s Impromptu on Musicraft. [An album that is best given a miss.]