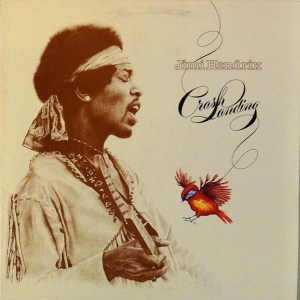 TWO GREAT TRIPLE PLUS SIDES on this original Reprise pressing! This is one of those somewhat controversial posthumous Hendrix albums, but it’s hard to argue with the quality of the best tracks on here, like the great Message To Love. I’m not going to go out on a limb and say this is a must-own album, but Hendrix fans will certainly find much to like here. We played a big stack of copies and most of them weren’t worth our time; a copy like this one lets you appreciate Jimi’s craft without mediocre sound getting in the way.

The overall sound is both richer and cleaner than you get on the average copy., not to mention more musical and enjoyable. The bass is strong, there’s lots of presence to the vocals and guitar, and more depth to the soundfield as well.

Bottom line? If you’re a Hendrix fan who wants to hear some of these later songs sound good, this Hot Stamper pressing will get the job done.

Before Hendrix died in 1970, he was in the final stages of preparing what he intended to be a double studio LP, which was given various titles such as ‘First Rays of the New Rising Sun’, ‘People, Hell & Angels’, and ‘Strate Ahead’ [sic].

Most of the tracks intended for this LP were spread out over three posthumous single LP releases: The Cry of Love (1971), Rainbow Bridge (1971), and War Heroes (1972). In the case of the last two of these LPs, a demo track, a live track, and unreleased studio tracks were used to fill out the releases.

In late 1973, his international label prepared to issue an LP titled Loose Ends which contained eight tracks, six of which were generally regarded as incomplete or substandard (the only two “finished” tracks on this release were “The Stars That Play with Laughing Sam’s Dice”, a heavily re-mixed stereo version of the B-side which had been released in the original mono mix on the 1968 European and Japanese versions of the Smash Hits, and a cover of Bob Dylan’s “The Drifter’s Escape”, both of which would ultimately be re-released on the South Saturn Delta CD in 1997).

Hendrix had amassed a great deal of time in the studio in 1969 and 1970, resulting in a substantial amount of songs, some close to completion, that were available for potential release. After the death of Hendrix’ manager in 1973, Alan Douglas was hired to evaluate hundreds of hours of remaining material that was not used on earlier posthumous albums.

“Peace in Mississippi,” “Somewhere,” and “Stone Free” were recorded with the original Jimi Hendrix Experience line up, while the rest of the material used on Crash Landing consisted of recordings Hendrix originally made with Billy Cox on bass and either Mitch Mitchell or Buddy Miles on drums and on one occasion by Rocky Isaacs.

The LP’s best-known tracks include “Message to Love” and “With the Power,” both of which find Hendrix leading his Band of Gypsies power trio. Also enjoyable is a remake of the famous “Stone Free”… those who are seriously into Hendrix will find that Crash Landing isn’t a bad record to have in their collections.