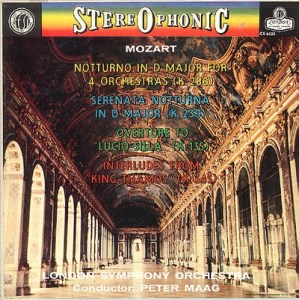 This London title has long been a favorite of ours here at Better Records, and this Blueback copy does not disappoint (except in the area of condition, see the notes below).

Side one, much like the amazing Mozart record we listed today, is spacious and three-dimensional like you will not believe. I would rank it in the Top Five Per Cent of all classical recordings in respect of those qualities. You can hear into the soundstage on this pressing like few recordings you own, we guarantee it.

It’s another London winner. You may get tired of me saying it, but it has DEMO QUALITY SOUND as regards its imaging and soundstaging.

The presentation is just right as well. This smaller orchestra does not get lost in a big hall, but instead as the intimacy that’s required for this music, while still giving us some nice space and ambient cues from the hall they’re in.

This music is played at a moderate tempo, so those looking for excitement won’t find much here. These pieces are written to draw you in, not to knock you out, and that they do beautifully.

A++. String tone and texture is very good, not the best we’ve ever heard but quite good nonetheless.

Not quite as good as side one, with a bit more smear to the strings, and not as three-dimensional either. The second work on side two sounds better though, so the grades would be A+ for the first piece and A++ for the second.

I love the fact that on the back of the cover in the upper right hand corner is written the retail price of $5.98. There was a time when you could walk into the record store and buy a record like this for under six bucks! This is an evening’s worth of sublime music for what today would be the equivalent of a Subway sandwich.