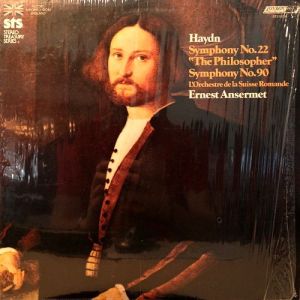 Nearly White Hot Stamper sound (A++ to A+++) for side one of this early British Stereo Treasury pressing, which should not come as too much of a shock — this is after all a vintage Golden Age performance by Ansermet and L’Orchestre de La Suisse Romande, a 1966 recording from the glorious Victoria hall in which so many of our favorite recordings were committed to analog tape through the all-tube chain Decca had perfected.

If only they all sounded this good! Although side two sounds much better than the average STS we play, at A+ it’s hardly in the same league as this superb side one.

A++ to A+++, so transparent, BIG, spacious and natural, this is the sound of live classical music. Many of the colorations some audiophiles like — the Decca thickness and overly rich bass just to pick two — are not to be found here, which is precisely why it sounds more like live music!

The strings can get a touch strident at their loudest, hence the lowering of the grade from White Hot to Nearly White Hot.

A+, with slightly smeary and hard strings, more of the sound we expected from a good STS.

The London catalog number for the original version of this album is CS 6481. As we’ve said on the site many times, London pressings with catalog numbers starting with 6400 to 6500 are some of the best recordings we’ve ever played. Allow us to quote ourselves at length.

As a rule, the classic ’50s and ’60s recordings of Ansermet and the Suisse Romande in Victoria Hall are as big and rich as any you may have ever heard. These recordings may in fact be the ideal blend of clarity and richness, with depth and spaciousness that will put to shame 98% of the classical recordings ever made.

AND, while we’re on the subject, it will surely shame 100% of the Heavy Vinyl pressings ever made, as no Heavy Vinyl pressing — not one — has ever sounded transparent or spacious to us up against the best Golden Age recordings, whether pressed back in the day or twenty years later. Many of the major labels were producing superb classical records well into the ’70s. By the ’90s no one, and we mean no one, could manage to press a good record.

Which is precisely the reason we stopped carrying The Modern LP Pressing — it just can’t compete with good vintage vinyl, assuming that the vintage vinyl in question has been properly mastered, pressed and cleaned.

This is of course something we would never assume — we clean the records and play them and that’s how we know they sound good. There is no other way to do it, despite what you may have read.