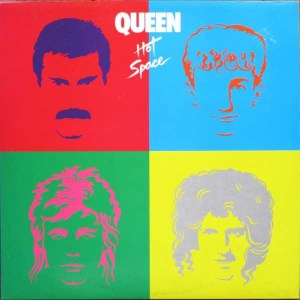 Queen albums in general are notoriously hard to find good sound for, and Queen albums from 1982 are probably even harder.

We’re guessing this album’s appeal is probably limited to fans of the band, but for those of you who want something different, or to hear Under Pressure sound good, we offer Hot Space with White Hot Stamper sound.

What do the best Hot Stamper pressings of Hot Space give you?

For our recent shootout we had at our disposal a variety of pressings we thought would have the potential for Hot Stamper sound. We cleaned them carefully, then unplugged everything in the house we could, warmed up the system, Talisman’d it, found the right VTA for our Triplanar arm (by ear of course) and proceeded to spend the next hour or so playing copy after copy on side one, after which we repeated the process for side two.
If you have five or ten copies of a record and play them over and over against each other, the process itself teaches you what’s right and what’s wrong with the sound of the album. Once your ears are completely tuned to what the best pressings do well that other pressings do not do as well, using a few specific passages of music, it will quickly become obvious how well any given copy reproduces those passages.

It may be a lot of work but it sure ain’t rocket science, and we never pretended it was. Just the opposite: from day one we’ve explained how to go about finding the Hot Stampers in your own collection. (The problem is that unless your a crazy person who bought multiple copies of the same album there is no way to know if any given copy is truly Hot Stamper. Hot Stampers are not merely good sounding records. They are copies that win shootouts. This is a fact that cannot be emphasized too strongly.
As your stereo and room improve, as you take advantage of new cleaning technologies, as you find new and interesting pressings to evaluate, you may even be inclined to start the shootout process all over again, to find the hidden gem, the killer copy that blows away what you thought was the best.

For the more popular records on the site such as the Beatles titles we have easily done more than twenty, maybe even as many as thirty to forty shootouts.
And very likely learned something new from every one.

Hot Space is an essential cog for Queen completists. If you’re going to love Queen, then you need to love Hot Space too, and everything that it entails. Or, at the very least, you need to learn to see the many positives. The trouble is, everyone thinks it’s an impossible album to love. Far be it from this piece to tell what you should or shouldn’t love, but it’s really not that tricky – Hot Space arranges all of Queen’s strongest whims and eccentricities, but they’ve become removed from a sympathetic context….

Hot Space has invention and ideas to spare. So get hip, relax! Hot Space sounds nothing like Queen think it does.