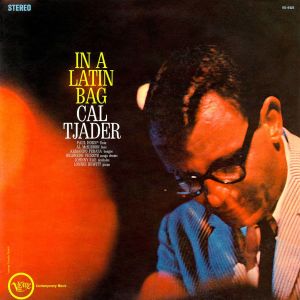 This vintage Verve stereo pressing has the kind of Tubey Magical Midrange that modern records can barely BEGIN to reproduce. Folks, that sound is gone and it sure isn’t showing signs of coming back. If you love hearing INTO a recording, actually being able to “see” the performers, and feeling as if you are sitting in the studio with the band, this is the record for you. It’s what vintage all analog recordings are known for — this sound.

What the best sides of In A Latin Bag have to offer is not hard to hear:

What We’re Listening For on In A Latin Bag

Triste
Misty
Mambo In Miami
Ecstasy
Half And Half

Cal Tjader recorded prolifically for Verve during the first half of the 1960s, though this is one of his lesser-known dates… Two low-key pieces open each side of the disc, the first with a subdued treatment of “Ben Hur (Love Theme)” with Hewitt switching to clavietta (which sounds similar to a harmonica) and Tjader taking over the piano. The leader’s more interesting “Triste,” which is highlighted by Horn’s warm solo, sounds as if it is played on an alto flute. The remainder of the disc explores standards like “On Green Dolphin Street,” classic jazz (“Misty”) and entertaining originals by several members of the group…. well worth snapping up if found.