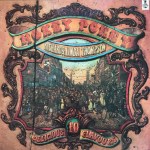 This is one of R&L Thompson’s best albums, their second release, following the luminous I Want to See the Bright Lights Shine from a year earlier. Rich and full-bodied, with big bass and gobs of studio ambience, this is the way this music was meant to be heard.

Hokey Pokey is the second album by the British duo of singer Linda and singer/songwriter/guitarist Richard Thompson. It was recorded in the autumn of 1974 and released in 1975.

Listeners keen to try to find connections between the albums by the Thompsons and their personal lives may be confused by the delays between writing, recording and release of the early albums. I Want to See the Bright Lights Tonight was conceived and recorded prior to the Thompsons’ embracing of Islam, but the album’s release was substantially delayed. By the time that album was released the Thompsons were living in an Islamic commune in London.

In the meantime the Thompsons had toured as a trio with Fairport Convention guitarist Simon Nicol. Nicol recalls that period: (in Patrick Humphries’ biography of Richard Thompson)

We did the folk clubs as a trio … It was just after they got married, and it was lovely. I look back on that period with great affection … It was really powerful. You could hear a pin drop at most of those gigs. Rapt attention. Two acoustic guitars, and the bass pedals went through a little backline combo amp, we’d use house microphones … It was stuff from Bright Lights … and Hokey Pokey, in the process of creation, Hank Williams’ songs …

So much of the material on the Hokey Pokey album was written sometime before the album was recorded and even predates the conversion to Islam. To add to the confusion the release of the eventual album was again delayed and so the song and the themes of the album lagged behind the development of the Thompsons’s personal lives.

“A Heart Needs a Home”, the ninth song, serves as Richard Thompson’s declaration of faith whilst also harking back to the unfulfilling existence portrayed in the preceding songs:

…I came to you when
No one could hear me
I’m sick and weary
Of being alone
Empty streets and
Hungry faces
The world’s no place when
You’re on your own
A heart needs a home.

In terms of musical style Thompson’s songwriting on this album reflects a number of British styles despite not being in the English folk-rock style of “Bright Lights”: Music Hall, English hymns, traditional brass bands, pub sing-alongs and even the double entendres of George Formby are all discernible.