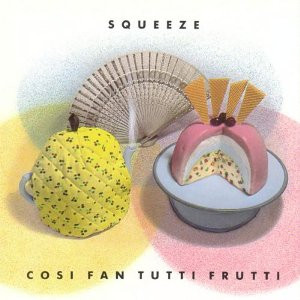 If you’re a fan of Elvis Costello, Graham Parker, Nick Lowe, Joe Jackson and even quite a few other lesser-knowns from this era, Squeeze is the band for you. I put them right up there with Elvis Costello and Peter Gabriel in the pantheon of Best British Pop Music of All Time.

There’s plenty of Tubey Magical richness and smoothness on the best British pressings — such as this one — qualities the domestic pressings are sorely lacking. If you want to hear this music right, on vinyl it’s British or nothing, and with one of our Hot Stamper pressings it’s British and everything — everything that’s good about this recording is captured on these sides.

The overall sound needs to be rich and tubey, not dry, thin or modern. Clarity and space are nice but not if they come at the expense of the smooth, rich, natural sound of tubes (whether there are tubes in the chain or not).

No Place Like Home
Heartbreaking World
Hits Of The Year
Break My Heart
I Won’t Ever Go Drinking Again (?)

This mid-eighties release by Squeeze is unique. Most reviewers back in the day gave it low marks primarily due to the cluttered, heavy-handed, and high-tech production by Laurie Latham. Squeeze was primarily revered for its intelligent songwriting and traditional (and often sunny) pop sensibilities and this album was certainly new sonic territory for the band. The organic pop sound of previous Squeeze records is replaced with synths, drum machines, and psychedelic Sgt. Pepper cello/string flourishes, all processed through tons of effects. The overall result is a dark, moody sound that was atypical of Squeeze.

As for the songs themselves, they are strong. Full of odd chord progressions that match the dark mood and make them less accessible than most of the band’s other song sets, and tackling heavy subject matter like family strife, alcoholism, broken relationships, etc, this album will take repeated listens to appreciate but is worth it. “By Your Side,” “I Learnt How to Pray,” and “Last Time Forever” are all darker tunes than just about any Squeeze had done so far but they carry an emotional punch.

“Big Beng,” “No Place Like Home,” and “Break My Heart” are quirky and disjointed but they are intentionally so and are really quite finely crafted tunes. “King George Street,” “Heartbreaking World,” and “Hits of the Year” are more straightforward melodically and are all quite good.

While this isn’t the typical Squeeze, it is still good and deserves more credit than it has received. Not the best place to start if you’re just getting into the band (see “East Side Story”), but for fans willing to explore new territory with the band this album has its rewards.

Cosi Fan Tutti Frutti marked not only a re-formation of the band but also a reunion with Jools Holland. And while history and a dated production style haven’t been particularly kind to the album, it is not without its merits.

…several of the songs — especially the often overlooked “King George Street” — are real gems in the classic Squeeze tradition, and the move toward “sophistication” is more fully realized and effective. A flawed but certainly worthwhile album, Cosi Fan Tutti Frutti deserves reassessment.

If you think you might enjoy the mashup of Pub Rock and New Wave that this group unleashed on the pop music scene of the ’70s and ’80s I could not recommend any album of theirs more highly than Argybargy. It’s a MASTERPIECE.

Squeeze’s prime period with Jools Holland on keyboards encompasses four albums, any of which is worth owning. The band really gets going with their second album, Cool for Cats (1979), then pulls it all together and takes it to another level for their breakthrough third, Argybargy (1980).

The band then produces two more of high quality, East Side Story (1981, produced mostly by Elvis Costello) and the darker but equally brilliant Sweets from a Stranger (1982).

I’m a huge fan of all four, as well as two from their later days, the amazing-to-this-day Cosi Fan Tutti Frutti (1985) and the weaker but still enjoyable Babylon and On (1987).

I play all of them on a regular basis and enjoy the hell out of them every time.

Squeeze are a British band that came to prominence in the United Kingdom during the new wave period of the late 1970s, and continued recording successfully in the 1980s and 1990s.

They are known in the UK for their hit songs “Cool for Cats”, “Up the Junction”, “Tempted”, “Labelled with Love”, “Black Coffee in Bed”, “Another Nail in My Heart”, “Pulling Mussels (from the Shell)” and “Hourglass”. Though not as commercially successful in the United States, Squeeze had American chart hits with “Tempted”, “Hourglass” and “853-5937”, and they have a dedicated following there and continue to attract new fans.