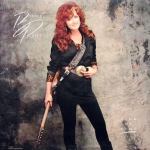 One of the biggest problems we ran into over and over again with this album is a lack of top end. The sound gets a bit too smooth and some of the ambience and spaciousness of the studio disappears. (This, to a much stronger degree, is the problem from which the DCC suffers.)

On the best copies note how silky the cymbal crashes are; not too many copies get them to sound that way.

The sound has the potential to be POWERFULLY BIG AND BOLD, with meaty, deep bass (such a big part of the rockers here, Thing Called Love being a prime example) and some of the sweetest, richest, most ANALOG sound we’ve heard from any record Don Was has been involved with.

When you hear it like this — something probably pretty close to what he heard during the control room playback for the final mix — it actually makes sense. It works. It’s not exactly “natural”, but natural is not what they were going for, now is it?

Listen especially for how all the elements of the recording are clearly laid out and audible, never forced or hyped in any way. The sound can be so 3-D!

Key note for side two — listen for the sibilance on Bonnie’s voice on Too Soon to Tell. Some copies have really gritty, spitty sibilance, others keep it well under control, with a much more silky quality to her vocals.

We play albums like this VERY LOUD. I’ve seen Bonnie Raitt live a number of times and although I can’t begin to get her to play as loud in my living room as she did on stage, I can try. To do less is to do her a great disservice.