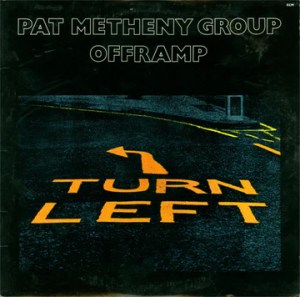 This superb pressing of Metheny’s ECM Chart-Topping release from 1982 shows you just how well recorded the album is. We don’t know how you feel about ECM recordings in general but we tend to think they are pretty lifeless and boring. Not so here!

We guarantee this copy has more CLARITY, ENERGY and DYNAMICS than any pressing of the album you have ever heard. Where is the muck? The blurry bottom end? The smear? All gone. And the bass is monstrous.

If you’re a fan of this 4 1/2 Star album, this copy will show you what you’ve surely been missing all these years — the kind of sound that lets this music breathe.

What We’re Listening For on Offramp

Barcarole
Are You Going With Me?
Au Lait

As cerebral as Metheny gets on such atmospheric pieces as “Are You Going with Me?” and “Au Lait,” his playing remains decidedly lyrical and melodic.

Clearly influenced by Jim Hall, the thoughtful Metheny makes excellent use of space, choosing his notes wisely and reminding listeners that, while he has heavy-duty chops, he’s not one to beat everybody over the head with them. Even when he picks up the tempo for the difficult and angular title song, he shuns empty musical acrobatics.

Throughout, Metheny enjoys a powerful rapport with keyboardist Lyle Mays, who also avoids exploiting his technique and opts for meaningful storytelling.