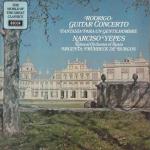 On some copies of this album the strings are dry, lacking the full measure of Tubey Magic we know the tape to have. This is decidedly not our sound, although we’ve heard if often enough, having played hundreds of vintage Decca and London pressings over the years.

Our 17D3 is ruler flat and quite unforgiving in this regard. While it certainly makes our shootouts much easier, it does bring out the flaws in all but the best pressings — exactly the job we require it to do.

If you were only to be allowed one Guitar Concerto recording, this would probably be the one to own. You will recognize the main theme instantly; it’s the one Miles Davis appropriated for the astonishingly innovative Sketches of Spain album he did with Gil Evans which came out the following year in 1960.

A++, including all the qualities we discussed above, with an especially immediate and real solo guitar.

With a bit more top end extension this side would have been White Hot. It should be noted that no Decca or London copy in our shootout had as much top end as we would have liked on the Rodrigo, a fault perhaps in the recording?

A++, equally good in its own way. Rich and lush strings, but slightly veiled compared to side one. So musical and analog, although, like many concerto recordings, the guitar is much larger in the soundfield of the recording than it would be in the concert hall.

The music is reminiscent of Respighi’s Ancient Airs and Dances, for those of you familiar with the work (a longtime resident of the TAS List. Wish we could find them!).

Classical Music on Vinyl — An Overview

We sometimes mention the benefits to be gained from listening to classical music on a regular basis. Once a week is a good rule of thumb for playing a recording from the classical world I should think. We all love our rock, jazz, folk and the rest, but there is something about classical music that has the power to restore a certain balance in your musical life that, for whatever reason, cannot be accomplished by other music. Perhaps it grounds your listening experience in something less immediately gratifying, yet deeper and more enriching over time. Once habituated to the effect, the changes in one’s mood are easy to recognize.

Moving Beyond the Average

Of course it should be pointed out that the average classical record is at best a mediocrity and more often than not a sonic disaster. There are many excellent pressings of rock and jazz, but when it comes to classical music — by its nature so much more difficult to record (and reproduce!) — the choices narrow substantially.

Most of what passed for good classical sound when I was coming up in audio — the DGs, EMIs, Sheffields and other audiophile pressings — are hard to take seriously when played on the modern high quality equipment of today.

We probably audition at least five records for every one we think might pass muster in a future shootout, and we’re pulling only from the labels we know to be good. We wouldn’t even waste our time playing the average Angel, Columbia or DG, or EMI for that matter. The losers vastly outweigh the winners, and there are only so many hours in a day. Who has the time to hunt for so few needles in so many haystacks?

With the above in mind, it should be clear that assembling a top quality classical collection requires much more in the way of resources — money and time — than it would for any other genre of music. We are happy to do some of that work for you — our best classical pressings are amazing in almost every way — potentially saving you a lifetime of work. But we do so at a price; the service we provide is time-consuming to carry out and, as you may have noticed, vintage classical records are not getting any cheaper or easier to find.

On the positive side, every Hot Stamper we sell is 100% guaranteed to satisfy in every way: music, sound, and playing condition. Ideally this means less work for you and more time for listening enjoyment, weekly or more if you can manage to carve it out of your schedule.

Heavy Vinyl – A Lost Cause

This wonderful vintage disc will surely shame 100% of the Heavy Vinyl pressings ever made, as no Heavy Vinyl pressing — not one — has ever sounded transparent or spacious to us when played against the best Golden Age recordings, whether pressed back in the day or twenty years later. Many of the major labels were producing superb classical records well into the ’70s. By the ’90s no one, and we really do mean no one, could manage to make a record that compares with them.

Precisely the reason we stopped carrying The Modern LP Pressing — it just can’t compete with good vintage vinyl, assuming that the vinyl in question has been properly mastered, pressed and cleaned. This is of course something we never assume — we clean the records and play them and that’s how we find out whether they are any good or not. There is no other way to do it — for any record from any era — despite what you may have read elsewhere.