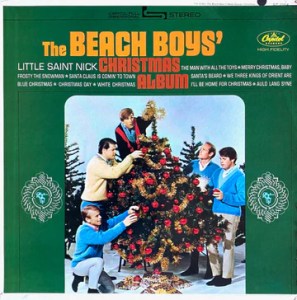 Having done this for so long, we understand and appreciate that rich, full, solid, Tubey Magical sound is key to the presentation of this primarily vocal music. We rate these qualities higher than others we might be listening for (e.g., bass definition, soundstage, depth, etc.). The music is not so much about the details in the recording, but rather in trying to recreate solid, palpable, and real Beach Boys singing live in your listening room. The best copies have an uncanny way of doing just that.

What We’re Listening For On The Beach Boys’ Christmas Album

Here’s what one of our good customers had to say about a Hot Stamper copy he purchased a while back:

I just had to write in appreciation of a killer Beach Boys pressing I bought from you last year. It’s so funny to me because it’s the Beach Boys Christmas Album, which is the kind of thing I’m sure audiophiles tend to dismiss. But wow, the sound of the vocals on this thing are just incredible! So much presence and texture in them; and this from a mid 70s pressing in stereo! I only wish I could find more sound like this for the Beach Boys, especially from Pet Sounds, but that presents a completely different set of problems I’m sure. Anyway, I was completely impressed by the A+ sound on these sides. I can only imagine what the White Hot Stamper holds in its grooves.

Beach Boys’ Christmas Album features the Beach Boys performing a variety of holiday favorites. Most of the featured songs are well-known, some of the more popular being “Frosty the Snowman,” “White Christmas,” “Santa Claus Is Coming to Town,” and “I’ll Be Home for Christmas,” among others. Furthermore, there are four songs composed by the Beach Boys — “Little Saint Nick,” “Man With All the Toys,” “Santa’s Beard,” and “Merry Christmas, Baby” — which begin the album. This mix of favorites and originals makes this a balanced holiday album that should please both Beach Boys admirers and those unfamiliar with the group.